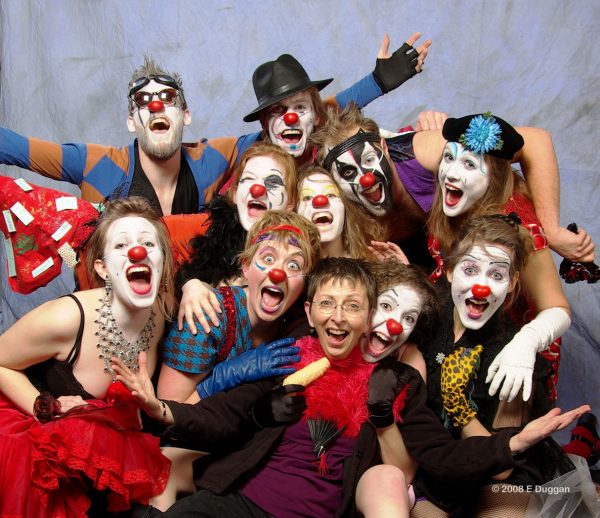 Get in touch with your most authentic, playful, creative aspect in order to discover and perform your own unique Clown character.

For performers, directors, writers, teachers, and anyone interested in creative process.

“ This workshop taught me the power of my own impulses. Do this for yourself no matter what discipline you may be in.” – Amanda Bergen, clown, actor, director

“Jan’s wonderful training was such an enriching feast of the arts – a fertile basis for everything I later undertook as clown, actor, and puppeteer.” – Maarten Leo Reinard, clown, De Spiegal Theatre, Belgium

Jan Henderson is one of Canada’s leading clown and mask teachers and directors. She studied and performed extensively with master teacher, Richard Pochinko, before co-founding with him what is now the Theatre Resource Centre, Toronto. From 1982-91 she was co-artistic director and performer with internationally acclaimed Small Change Theatre, literally clowning her way around the world, discovering first hand that laughter is the universal language. Jan teaches at Grant McEwan University, Toy Guns Dance Theatre, and the University of Alberta, where she has received four awards for excellence in teaching. Most recently, she taught a workshop at Toronto’s Young People’s Theatre on Clown technique as applied to Waiting For Godot. Her work is featured in the documentary Phyllis’s Miracle, the NFB film To Be A Clown, and the U of A films, The Art of Clowning and Clown and Mask. Jan directs for Girl Clown Theatre, and is co-artistic director of Small Matters Productions, whose shows have toured to festivals in Western Canada, and performed at Edmonton’s Play the Fool Festival, the Toronto Festival of Clowns, and the New York International Clown Theater Festival. She is on the Creative Faculty of Leadership Development at the Banff Centre, and is a recipient of Global Television’s 2005 Woman of Vision award. In 2014 she was nominated for an Outstanding Lifetime Achievement Award for the Mayor’s Celebration of the Arts, Edmonton. After a twenty-five year hiatus, Jan recently returned to the stage in the popular clownesque comedy, Over Her Dead Body, for Edmonton’s Fringe Theatre Adventures, and she is the subject of a new documentary, now in production, called the The Wise Fool.

“The vulnerability and openness of your inner clown is absolutely your key strength.” – Geoffrey Rush, actor

“Clowning offers the performer a freedom that can’t be found in any other form.”  – Angela de Castro, clown

“Play is the highest form of research.”  – Albert Einstein