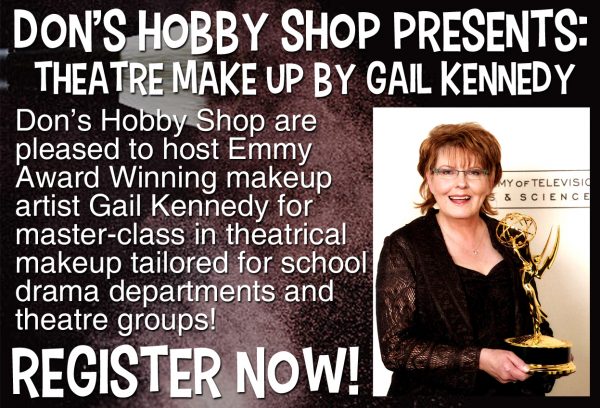 Don’s Hobby Shop and Theatrical Supplies are pleased to host Gail Kennedy for a one day master-class in theatrical makeup – tailored for school drama departments and theatre groups!

Having worked on Fargo, Passchendaele, and Legends of the Fall (to name a few) Gail has over 40 years in the industry. She will bring a breadth of experience and some amazing anecdotes, to make a class that is as fun as it is informative!

Born in Montana into a family of “artistic and clever siblings”, Gail was demanding a better quality of work early. When given a ‘standard grey’ coloring crayon at age of 5, she decided her work required something more. “I need browny grey!” Luckily, her older sister understood her need and bought her the big box set.

It was during her acting years in University, when creating 60 year old character make-up for herself, that the make-up artist was born. With continuing study, enthusiasm and experimentation, Gail has risen to the pinnacle of her profession, garnering an Emmy for her work on Bury my Heart at Wounded Knee, and five additional Emmy Nominations; two for Into the West, and three for Fargo. She and her team won a Hollywood Makeup Guild Award for their work on Fargo, and garnered two additional Makeup Guild Award nominations for Fargo 2. Other credits in her past 38 years of work include, Legends of the Fall, The Assassination of Jesse James, the Canadian World War I feature, Passchendaele, Hell on Wheels, and the feature Forsaken for which she received a Canadian Screen Industries Award nomination, and her 6th Alberta Motion Pictures Industry Award win. Mrs. Kennedy also heads the make-up department for the Calgary Opera.

A born teacher, she uses her knowledge and vast professional experience to teach workshops locally and internationally.

Gail will be demonstrating various character make-up designs on high school aged people. Teachers attending the class will learn how theatre make-up can create characters and personalities for the stage. Make-up can enhance a performance by transforming appearance to reflect health, profession, economic status, age etc.

Join us on Friday, January 26th from 1pm to 4pm

Register now donshobbyshop.ca/articles/theatre-makeup or call on 403-262-5717 to book your place.
Spaces are limited.