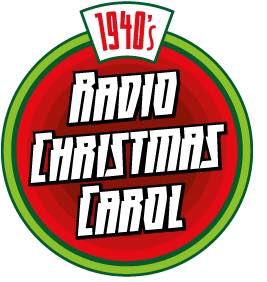 The Leading Stars Arts and Education Foundation is proud to present;

It’s Christmas Eve, 1943, and the Feddington Players are now broadcasting from a hole-in-the-wall studio in Newark, NJ, and set to present their contemporary “take” on Dickens’s A Christmas Carol. Whether it’s the noisy plumbing, missed cues, electrical blackouts, or the over-the-top theatrics of veteran actor, but radio novice, William St. Claire, this radio show is an entertaining excursion into the mayhem and madness of a live radio show. St. Claire’s escalating foibles and acting missteps propel the show to a simultaneously comedic and heart-wrenching dramatic climax: St. Claire has an on-air breakdown, and begins to connect his own life with that of the classic Dickens tale. In order to “save the show,” the company improvises an ending to Charles Dickens’ classic as a film noir mystery, featuring a hardboiled detective, a femme fatale, and an absurd rescue of Tiny Tim (and the Lindbergh baby) from the clutches of a Hitler-esque villain named Rudolf!

Rehearsals begin Tuesday, September 26th 2017 and will be scheduled each Tues and Thurs from 6:30-9:30pm with Sunday rehearsals added on a as need basis.

You do not need to prepare a monologue, auditions will consist of a cold read. Please bring a resume and a headshot. Ages 18+

The Leading Stars are committed to inclusive casting and opportunity. We encourage all artists who self-identify as under-represented communities to audition. The Leading Stars is a volunteer foundation, we cannot engage equity performers.

Please email with any questions to the director Ed Medeiros edmedeiros@hotmail.com or the Producer Annette Swanson annetteb466@gmail.com

WILLIAM ST. CLAIRE – 70 year-old, retired star of stage and screen. With a great mane of dramatic white hair, William is a bit of a curmudgeon and looks down on radio as one of the bastard children of the stage. William’s 31 year-old son David was killed in the Air Force in France in June 1943. A guest performer in tonight’s show, Mr. St. Claire plays Scrooge.

CHARLES “CHOLLY” BUTTS – 35 year-old funny man. Has a day job as a baker at Weequahic Diner (where his specialty is the nesselrode pie). A little stout. Lives in Jersey City, with his wife, Midge, has no kids, and has a hopeless and unrequited crush on Margie.

FRITZ CANIGLIARO – Once an east-coast Florsheim Shoe salesman (and still plugs them whenever he gets an opportunity for a little commission), now a WOV regular. The resident masher, cynic and wise-guy, Fritz plays Frank Nelson cameos in comedy sketches. In his early 40s.

“LITTLE” JACKIE SPARKS – Not actually “little,” but young. A tenor with a high speaking voice. Having just graduated from high school, Jackie, only 17, lives with his mom in suburban Newark. Calls home probably a dozen times a day. Teased a lot. Still has a Sunday paper route.

JUDITH DAVENPORT – Although quite the cutup herself, Judith is the resident “leading lady” playing all such roles as a regular. Has two kids and two ex’s and wants no more of either. Determined and stubborn. Considers herself a “legit” actress. Day job working as a switchboard operator. In her 30s.

MARGIE O’BRIEN – Brassy, flippant, with a voice to match (think Ginger Rogers in “Stage Door”). As a show regular, plays the comic roles. This 30 year-old Irish-American comedienne lives with her two sisters, Zazu and Vi, in a two-room apartment in Queens. She works days as a bookkeeper/typist/stenographer/receptionist.

SALLY SIMPSON – 20 year-old Sally seems sweet and gentle, but is a tough lady. Lives on the lower east side of Manhattan. As a show regular, plays all animals, babies, insects, little kids. Makes the long train ride to Babylon, Long Island, three days a week, to contribute to the war effort by working for Republic Aviation operating drill presses and riveting guns. Always trying to recruit the other WOV women to join “the cause.”