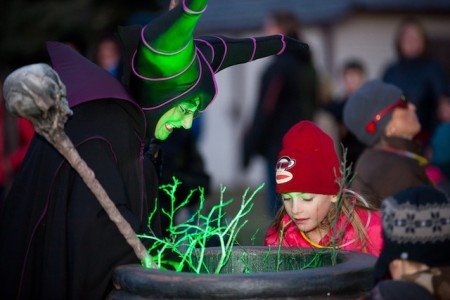 Rapunzel and Anna (From Frozen)
Rapunzel, exhausted from being a captor, considers cutting her hair. Anna talks Rapunzel down of the ledge from committing hair suicide. Characters: Rapunzel & Anna.

Sith Lord versus Jack Sparrow & C-3PO: A Lightsaber Fight
Jack investigates the remains of an Imperial crashed space shuttle, making away with some precious diamonds. A Sith Lord awakens from crashed cock-pit to challenge Jack to an epic lightsaber fight to Pirates of the Caribbean style music. C-3P0, a captor, hustles in to referee. Characters: Pirate, Sith Lord & C-3P0

Audrey 3 and Seymour Scene:
Audrey 3, a new breed of plant life unknown to this planet, attempts to convince Seymour to feed him with Zombie body parts. They sing a parody of song bits from Little Shop of Horrors. Characters: Audrey ~ The actor will operate the physical plant puppet and voice the character. (Singing is an asset).
Seymour ~ The keeper of Audrey. (Singing is an asset).

Beetlejuice and his/her Haunted Midway Characters:
The Games area of the Midway is brought to life with three different booths of horrors.
Characters: Beetlejucie ~ The announcer and master of ceremonies (may be male or female)
The Bearded Lady (Singing is an asset).
Serpentina the Snake Woman

Zoltar the Fortune Teller
Similar to the booth from the movie “Big”; guests will line up to have Zoltar tell them their fortune.
Character: Zoltar

Draculena
A girl/lady escapes from a coffin only to discover the wonders of becoming a new Vampire. She sets on a course of making her first kill, her beloved cat Charles. She then begins the establishment of a blood donor clinic for Vampires of all types.
Character: Draculena

Heritage Park is committed to diverse, inclusive casting. Ghouls’ Night Out is a volunteer performance contract. Equity members will not be seen at these auditions.