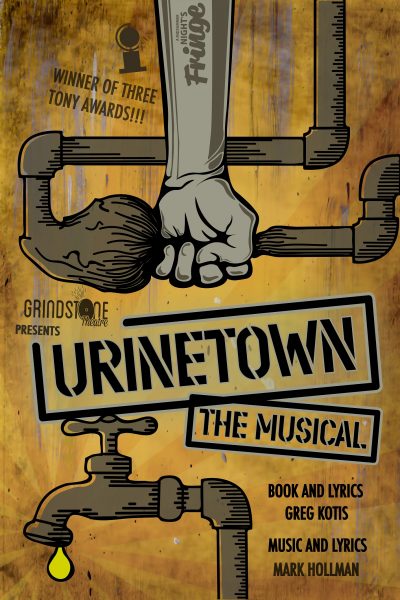 THE REVIEWS ARE IN FOR URINETOWN!!

HELD OVER – Fringe Performances Selling Out!

Go to: http://www.grindstonetheatre.ca/urinetown/ for tickets for our remaining Fringe Performances (tickets are still available for the Saturday, August 26th and Sunday, August 27th performances but selling fast!) or to catch the show in Hold overs on August 29th, 30th or 31st at 8 pm.

In a Gotham-like city, a terrible water shortage, caused by a 20-year drought, has led to a government-enforced ban on private toilets. The citizens must use public amenities, regulated by a single malevolent company that profits by charging admission for one of humanity’s most basic needs. Amid the people, a hero decides that he’s had enough and plans a revolution to lead them all to freedom!

Inspired by the works of Bertolt Brecht and Kurt Weill, Urinetown is an irreverently humorous satire in which no one is safe from scrutiny. Praised for reinvigorating the very notion of what a musical could be, Urinetown catapults the “comedic romp” into the new millennium with its outrageous perspective, wickedly modern wit and sustained ability to produce gales of unbridled laughter.