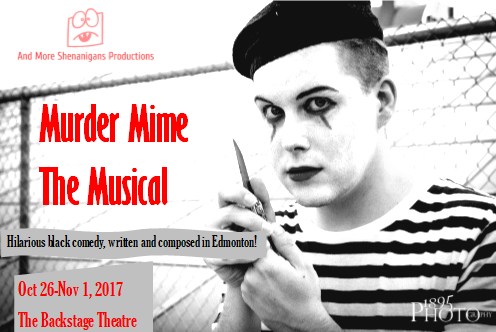 Auditions for a quirky black comedy, Murder Mime the Musical!

Murder Mime the Musical will premiere at the Backstage Theatre from Oct 26 –Nov 1, 2017.

And More Shenanigans Productions is dedicated to creating and developing quirky original works.

Murder Mime the Musical is an absurdist black comedy about an opera student who loses his voice and becomes a “serial killer.” Murder Mime the Musical originally appeared at the Edmonton Fringe Festival in 2014. Since then it has gone through many revisions while still remaining true to its unconventional roots. It was written and composed in Edmonton.

We are looking for the following roles:

Rosemary: (Played by a young looking adult) Max’s exuberant nine year old neighbor who has no shame in declaring her love for him.

Rosemary/Sadie will be double cast. There are many other small roles in this show, if cast, you may be asked to play an additional role(s).

Please prepare a monologue and a song from a theatre production. Please bring a backtrack in the form of a USB, CD, or use your phone. You may also be asked to read a side from the script.

To inquire, or to request an audition, please email your headshot and resume to Erin at andmoreshenanigans@outlook.com.

If cast, a small honorarium and cut of the profits will be awarded once the production is complete.