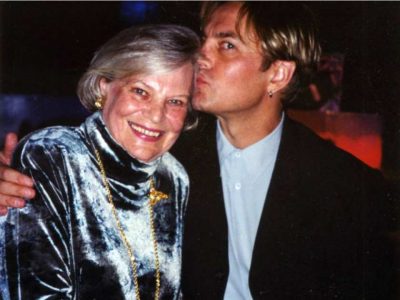 Calgary loses one of the true pioneers of theatre in the city.

Excerpted from the Calgary Herald; Written by Louia B. Hobson; Published May 10, 2017.

With the passing of Georgie Collins on May 3 at age 91, Calgary lost one of the true pioneers of theatre in the city.

She was an actress, director, administrator and an inspiration for hundreds of fellow artists.

This year Vertigo Theatre celebrated its 40th season of mystery, murder and mayhem.

It was Collins who spearheaded the creation of a mystery theatre company back in 1976 when she was the manager of the Pleiades Theatre in Calgary’s Planetarium and she would lead it until 1990.

Craig Hall, the current artistic director of Vertigo Theatre says that “Georgie’s legacy is felt in the more than 1.5 million theatre lovers who have passed through our doors, and it will continue to be felt in thousands more theatre loves still to come.”

He says that since posting news of Collins passing and her memorial, his Facebook has been inundated with tributes from many members of the theatre community stressing it was Collins who gave them their start in theatre in Calgary and nurtured their early careers…

Collins was also active in the city’s young film community from the 1970s until the 2000s.

She had cameos in such productions as Honey I Shrunk the Kids, Gunsmoke: Return to Dodge, The Ray Bradbury Theatre, In Cold Blood, Lonesome Dove, and How the West Was Fun.

She was the star of the 1981 local horror film Ghostkeeper, written and directed by Jim Makichuk which also starred Riva Spier, Murray Ord and Sheri McFadden.