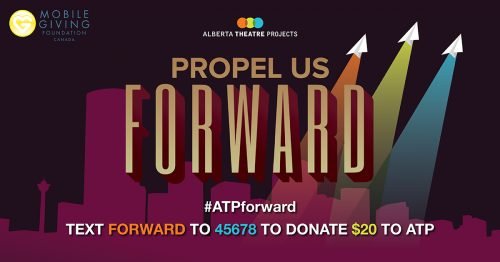 On May 2nd, Alberta Theatre Projects announced that their urgent fundraising campaign had succeeded in raising more than $250,000, 125% of its original goal of $200,000.

During a celebration with supporters, community partners and neighbours on Olympic Plaza, Executive Director Vicki Stroich made the following statement:

“In the two months since we launched our appeal, we’ve been overwhelmed by the outpouring of generosity from our community. Through your donations, kind words and offers of support, we’ve seen just how passionate our community is and how much it values the ground-breaking work that ATP does and our role as community builders. In response to this incredible show of faith, we offer our sincerest and most heartfelt thanks to everyone who took the time to donate, share the news, vocalize their support for the arts, see a show, and help ATP forge a new way forward.”

Launched on March 1st, 2017 in response to a cumulative 77% drop in corporate sponsorship that left the company with a $400,000 gap in funding, the campaign was bolstered at the outset by a one-time, $200,000 proactive grant from The Calgary Foundation, leaving the remaining $200,000 to be raised through a public appeal. Of that $200,000 public goal, 90% of all donations that were received came from individual donors. In total, over 780 people contributed to the fundraising campaign, the overwhelming majority of whom were first time donors to ATP.

“The success of this fundraising campaign has helped ATP buy much-needed time over the short term to develop and implement adaptive changes that are necessary to address the new market realities facing not-for-profit arts companies in Calgary,” said Frank Durnford, ATP Board of Directors’ Vice President of Development.

Over the long-term, changes to the company’s producing model and other core business will be implemented in planning for future seasons, working towards a new model by 2021-2022, ATP’s 50th anniversary season. The company is currently working with a program called New Pathways for the Arts, developed by EMC Arts, to help it discover and implement new ways of working that will support ATP’s core principles and values while allowing it to become more adaptive and resilient to environmental changes in the arts and culture industry.