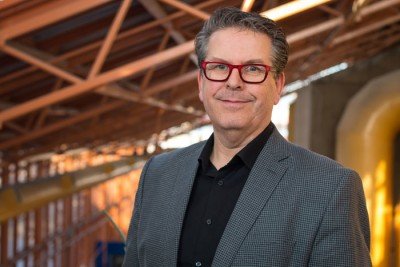 “With the new building, lots of degree development and so many really exciting things going on, it’s such an exciting time to be leading this faculty,” Gilliland says.

When Allan first arrived at MacEwan, it wasn’t with the ambition of becoming a student, professor, chair or dean. He had a much simpler mission: to hang out.

“In 1986 I was a music student at the University of Alberta, but the big band at MacEwan was short a trumpet player—that’s my instrument,” he says. “So they asked me to come over and just play in the band for fun. I did that for four or five years.”

What won him over was the atmosphere. “I fell in love with MacEwan because at the U of A music program, nobody hung out. Nobody sat around talking about music and arguing about albums or artists like they did at MacEwan. I instantly felt comfortable here. So initially I wasn’t even working here. I just wanted to hang out!”

“Being downtown will really transform us. Not only will we be connected to the rest of the university, but we’ll also be in the heart of the city,” he says of the faculty’s upcoming move to the new Centre for Arts and Culture on City Centre Campus. “As a faculty that focuses primarily on the fine and performing arts, we’re suddenly next to the Art Gallery of Alberta, the Citadel, the Winspear and a bunch of smaller art galleries, theatres and venues.”

He also sees the downtown location as a bigger draw for community partners. “One of my major initiatives is to get community members and organizations using our building in ways that also benefit our students,” he says. “For example, maybe we get some bands to rehearse in our building, and rather than charging a rental fee, ask them to dedicate one or two rehearsals a year for music students to write pieces for the band to read. Students would get to hear their compositions played live—an experience that’s different from having a computer play it for them. I think through all the departments and programs there’s an equivalent to that kind of idea.”

Though his dean duties will cut down his course load, teaching is still Allan’s passion.

“I am not an administrator. I’m a creative composer and a teacher, and I think that’s one of the strengths I had in applying for this job. When it comes to my priorities as a dean, it’s not about micromanaging budgets—even though I have to do that too—it’s about students, it’s about faculty, it’s about creation and it’s about teaching.”