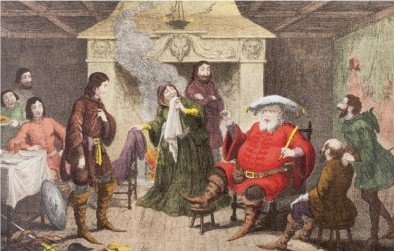 Bombast & Bawdy Ballads: An Evening in Each Cheap

Come celebrate the season with Grindstone Theatre and the Malachites at our HENRY V launch party! Gather your company of rogues, show your support for emerging artists in your community and join us for a madcap evening of Shakespearean shenanigans you won’t want to miss!

But ‘fore he won and made a fray
That France shall rue til Domesday,
Our good King Harry he did play
Sweet England’s best-loved knave

To the Band of Brothers, drink we deep!
Let us in wine our glad hearts steep
And sing old songs a’fore we sleep
Of taverns, Falstaff, and East Cheap!

Following the English victory at Agincourt, balladeers immortalized King Henry’s glory in songs like ‘The Agincourt Carol’ (15th c.). But if Shakespeare’s characters were to regale us with tales of their King Henry, we might soon be taken back to his days of roguery in East Cheap, drinking at The Boar’s Head Tavern with Bardolf, Mistress Quickly, and of course, that famous creature of bombast, Sir Jack Falstaff.

On January 5th, Holy Trinity’s Lower Hall will be transformed into Falstaff & Hal’s favorite East Cheap tavern where we’ll share famous scenes, sing bawdy songs, and raise a cup of sack together! Drinks and snacks will be available as well as some amazing raffle prizes, and all funds raised go towards our upcoming production of Shakespeare’s HENRY V at Holy Trinity in January, 2017.

Thanks to our amazing local sponsors, our incredible prizes include:

WHERE: Holy Trinity Church, Lower Hall.
WHEN: 7pm, Thursday January 5, 2017.
TICKETS: On the door by suggested donation of $10.

Don’t let this holiday season pass you by without a night of carousing with your favorite Shakespearean rascals! You can check out all the details on this and other HENRY V events at www.grindstonetheatre.ca, RSVP to our Facebook Event Bombast & Bawdy Ballads: An Evening in East Cheap, and tweet us @Grindstoneyeg or @themalachites #HENRYV

Photo: Falstaff and the gang at The Boar’s Head Tavern.