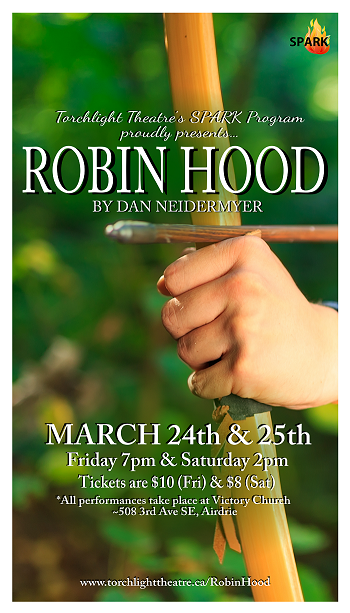 Torchlight Theatre’s SPARK Youth Program is holding auditions for this year’s youth production of ROBIN HOOD! If you are between the ages of 12-16, or know of someone who is, we would love to see you audition for us!

Synopsis: Join Friar Tuck, the wandering minstrel and man of the cloth, as he introduces you to the Prince of Thieves, Robin Hood! Hear the legendary tale and watch it come to life as you meet Little John, Robin’s right-hand-man, Maid Marian, Robin’s sweetheart and love, and Marian’s dedicated handmaiden, Cassandra. Let’s not forget the evil Sheriff of Nottingham and the despotic monarch King John. It’s an adventure you will not want to miss!

Character Breakdowns: some actors will be playing multiple characters

Audition Requirements: Please prepare a monologue that is no longer than 2 minutes to best showcase your skills.

Rehearsals Begin: Saturday, October 15 from 10am to 3pm and will run weekly.

Please review rehearsal schedule and commitment before registering for your audition. While a conflict may be accommodated during rehearsals, YOU MUST BE AT TECH WEEK AND ALL PERFORMANCES.

We are excited to add a new element to our SPARK Youth Production this year! We will be bringing in Industry Professionals to run workshops with the students throughout the duration of the program. These workshops will include things like Stage Combat and Voice Work. Because there is a cost associated with bringing in workshops like this, there will be a fee for those students who are selected for the production, in an effort to cover a portion of the workshop costs.