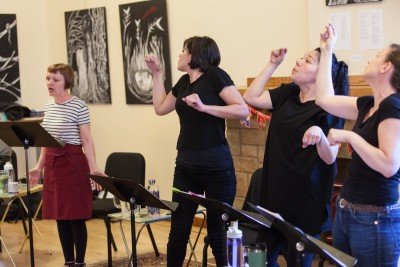 The first Sunday of every month features a reading of a new play by an Alberta based playwright. From dramatic monologues to full length plays featuring a dozen actors, from rollicking farces to heart breaking tragedies, from works by world renowned local playwrights to established artists in other disciplines who always wanted to have a go at writing a play, SCRIPT SALON is dedicated to spotlighting the wide variety of voices resident in this province.

Presented the first Sunday night of every month in the Upper Arts Space at Holy Trinity Anglican Church, SCRIPT SALON has attracted a large and loyal audience, gathering to hear sparkling new plays ready for production as performed by some of Edmonton’s finest actors. After the reading many audience members stick around to enthusiastically participate in the playwright talkback sessions that follow.

ALSO: On November 20, 2016, SCRIPT SALON will be presenting a special event in conjunction with Holy Trinity Anglican Church’s Artspirit Festival featuring the reading of eight short plays by local playwrights. It will be a veritable theatrical buffet offering a savoury selection of comedy, drama and fun.

Under the guidance of a volunteer organizing committee (David Belke, Beth Graham, Katherine Koller & Reed McColm) SCRIPT SALON has grown by leaps and bounds since its first reading in April 2014. It has earned the admiration of playwriting organizations across the nation and the affection of a multitude of audience members. It remains dedicated to providing an important development resource to its featured writers while serving audiences a generous sampling of exhilarating entertainment with no admission charge.

In a city that is home to a multitude of playwrights, SCRIPT SALON has happily become a voice and standard bearer for theatrical creation in Edmonton.

WHEN: The first Sunday of every month at 7:30pm.

Photo (Top): The reading of Karen Hines’ All the Little Animals I Have Eaten as performed by (L to R) Clarice Eckford, Candace Berlinguette, Nadien Chu and Tracey Power by Baos Photography, April 3, 2016. 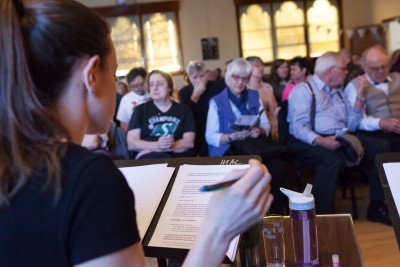