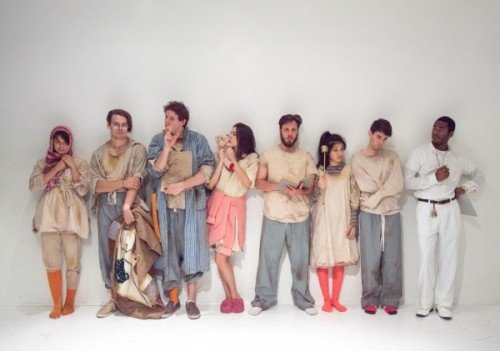 Synopsis: There’s violence on the ward, and MESSENGER (the caretaker) wants everyone to refrain from using it ñ or else they’ll lose rec room permission. Caught fighting, our cast of characters: WRITER, DIRECTOR, and three ACTORS: face removal from their beloved rec room, but WRITER is determined to cover it all up as a play. DIRECTOR thinks that’s a bad idea, but also wants to be in charge. The actors, SARCASTIC, ANGRY, and LOATHING, have deeply-ingrained characteristics that make it difficult for them to execute their roles. The two CRITICS are non-participatory observers who offer little help. Will these characters manage to create a play (ironically entitled The Golden Smile) in order to save themselves?

Production Notes: The Golden Smile is an absurdist play (in the musical sub-genre) inspired by the writing of Samuel Beckett, Chuck Palahniuk, and Monica Drake, as well as the novel and film One Flew Over the Cuckoo’s Nest and A Midsummer Night’s Dream. The story is set on a psych ward, where an overworked caretaker provides sparse violent enforcement of ward safety to a group of creative mental patients. Characters in this story serve multilayered roles as both members of the psych ward and as team members of their own creative project. The show raises pointed questions concerning the nature of mental illness and its treatment. The script contains some French, some German, some gibberish, a lot of cursing, and even more puns. This is an actor-heavy project for which versatility and authenticity are keys to successful execution.

DIRECTOR (Character) (Lead): No sex specified, 18-65 Tactful character who enjoys pushing peopleís buttons. Doesnít really care for the games of the other characters but enjoys bossing them around. Importantly, this character knows everyoneís diagnosis and how to care for them when theyíre down. Ethnicity: All Ethnicities

WRITER (Character) (Lead): No sex specified, 18-65 Autistic clever character who isnít in touch with his/her emotions. Knows how to express emotions but doesnít feel them. Ethnicity: All Ethnicities

ANGRY ACTOR (Lead): No sex specified, 18-55 Has a history of PTSD from fighting in WWI, is physically and verbally aggressive, perhaps unintentionally. Ethnicity: All Ethnicities

SARCASTIC ACTOR (Lead): Female, 16-32 A bitter and sarcastic girl with a history of abuse. Character has minimal education and is bitter about it; wants to be center of attention, is overly mean when sad. Ethnicity: All Ethnicities

MESSENGER (Lead): Male, 22-60 An overworked forceful caretaker who does his best to care for the patients but sometimes uses violence to enforce ward rules. Ethnicity: All Ethnicities

CRITIC/seated (Supporting): No sex specified, 16-60 A straight-jacketed patient who has no interest in being present in the rec room and voices his/her sentiment of that often. Ethnicity: All Ethnicities

CRITIC/wandering (Supporting): No sex specified, 16-60 An incoherent mental patient who has little awareness for the play being construed Ethnicity: All Ethnicities

Travel and Accommodation: Actors will be provided public transportation passes in Edmonton. Actors are responsible for getting to Edmonton and for finding their own accommodations.

Compensation: All roles are paid. The amount will be based on a profit share and will depend on ticket sales.