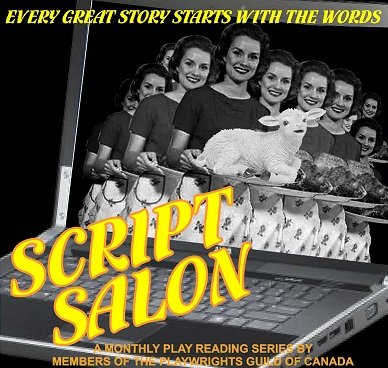 On Sunday, April 3,  SCRIPT SALON, in partnership with EQUITY IN THEATRE, is proud to present a reading of an extraordinary and thought-provoking new play by Karen Hines, whose plays have thrilled and delighted Edmonton audiences both at and outside the Fringe.

All the Little Animals I Have Eaten draws on Alison Bechdel’s famed test of fictional female independence as a point of departure to explore professions, moral philosophy, art, social systems, faith, madness (global, not neurotic) and questions surrounding existence, death and salvation through the perspectives of the ghosts of brilliant authors, several small vertebrates and non-vertebrates, as well as other unexpected voices.

Karen is the author of five award-winning plays, and is a two-time finalist for the Governor General’s Award for her Pochsy Plays and Drama: Pilot Episode. She is a Dora Award-winning performer and director, having directed all of adult horror clowns Mump & Smoot’s shows, as well as premiere productions of Linda Griffiths’ Age of Arousal (ATP) and Heaven Above (Passe Muraille). Hines’ performances, plays and productions have been presented across North America and in Germany and her recent prize-winning trio of short films has screened internationally. Chicago-born, Toronto-raised, Karen now lives in Calgary. Recently, she performed in One Yellow Rabbit’s Calgary I Love You But You’re Killing Me and premiered her newest play, Crawlspace at Toronto’s Videofag; Crawlspace will return to Toronto and will premiere in Calgary this year.

The Bechdel-Wallace is designed to test whether a fictional female character demonstrates freedom of agency or personal independence, by setting the following criteria:

Sunday, April 3 at 7:30pm in the Upper Arts Space at Holy Trinity Anglican Church (10037 84 Avenue). Admission is free although donations are accepted. Refreshments are available. Parking is free.

After the reading the audience is encouraged to ask questions and provide commentary directly to the playwright.


SCRIPT SALON is sponsored and supported by the Playwrights Guild of Canada, Alberta Playwrights Network and Holy Trinity Anglican Church.