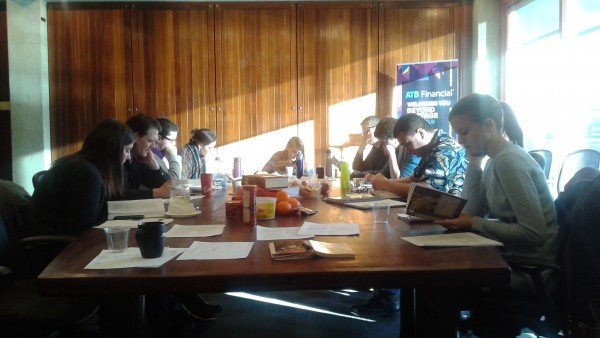 Join Shakespeare Workshops Alberta and the UK’s critically-acclaimed Malachite Theatre as they team up with the Citadel to present Shakespeare Sunday; a monthly series of play-readings dedicated to exploring some of the bard’s less familiar work in a collaborative, fun and enlightening environment. Led by industry experts Benjamin Blyth and Danielle LaRose; and hosted by the Citadel’s Director of Education and Outreach, Doug Mertz; this months Shakespeare Sunday looks at Shakespeare’s other King of Ancient Britain: Cymbeline. For their 2016 season and under their first female artistic director, The Globe Theatre has re-imagined and re-named this play Imogen as they shift focus from the agèd king to the oft-unsung heroine of Shakespeare’s story. “Could I find out The woman’s part in me! For there’s no motion That tends to vice in man, but I affirm It is the woman’s part- They are not constant but are changing still One vice, but of a minute old, for one Not half so old as that. I’ll write against them” Posthumus Leonatus, Act II scene v

SHAKESPEARE SUNDAY GIVES YOU THE CHANCE TO:

• Explore some of Shakespeare’s less familiar works as you read through a new play each month,
• Step into your dream roles and uncover new ones,
• Discover new speeches, scenes and situations useful for audition and rehearsal,
• Improve your natural verse speaking and confidence with the help of seasoned Shakespeareans in this casual atmosphere,
• Deepen your understanding with the help of industry mentors and special guests as they guide you through each play, offering valuable insight into the plays inner workings,
• Meet new friends, connect with your local theatre community and have a good time!

SHAKESPEARE SUNDAY is open to everyone regardless of experience, and this month’s play reading is FREE TO ATTEND! Please register your attendance with daniellelarose@live.ca in advance. Please only register if you are free to attend, as we need to keep an eye on numbers.

A copy of the play or the Complete Works if you have one. We will have a few extra copies to hand but will not be able to provide for everyone. We advise you bring a water bottle and a snack to share with the group.

Benjamin Blyth is a critically-acclaimed Shakespeare director from London, UK. A graduate of the University of Cambridge and the Royal Academy of Dramatic Art, Benjamin has directed work at some of the world’s most important and historic Shakespearean sites – including the Rose Playhouse, Bankside; the Curtain Theatre, and St Leonard’s Church, Shoreditch. Benjamin’s work has been featured on a number of occasions by the Arden Shakespeare, and he has recently completed directing Bafta-Nominee John McEnery’s King Lear“impressive and moving” (The Times).

Danielle LaRose is a Canadian-born actor recently returned from 6 years on the British stage. She holds an MA in Musical Theatre from Glasgow’s Royal Scottish Conservatoire and has been teaching, acting, and is a co-company director with Elizabethan repertory company The Malachites. She is currently developing a new approach to verse speaking using musical techniques.