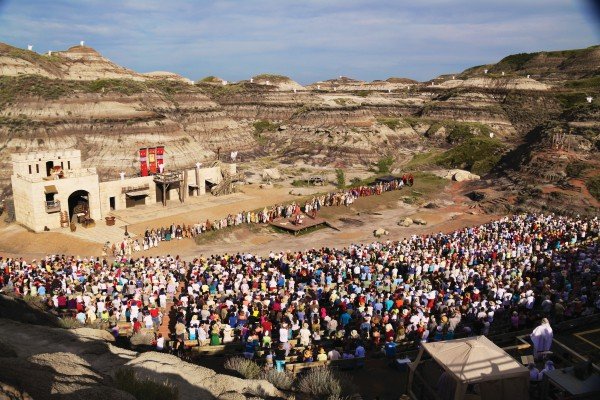 The Canadian Badlands Passion Play is currently accepting applications for Assistant Directors for the spring and summer of 2016. The Assistant Director roles are quite unique at the Passion Play as we are a professionally supported community theatre company on a filmic scale. Our stage is over a kilometer from SL to SR and rises in elevation more than 100′. The cast is approximately 200 performers, depending on the year, and 95% are volunteers. Because of this we have a team of 4 to 7 Directors to create the show headed by the Lead Director (who this year is Brian Jensen). The directing team consists of 2 titled assistant directors; the ‘Assistant Director – Crowds’ and the ‘Assistant Director – Action/ Militia’ as well as a Music Director, an Assistant Music Director, and up to two ‘Intern Assistant Directors’. The rehearsals and performances happen outdoors on our stage in all kinds of spring and summer weather with as much tech as possible from day one.

Assistant Director – Crowds: Due to the large number of volunteer performers involved in populating the world of the Passion Play, the ‘Assistant Director – Crowds’ is hired to deal specifically with the body of performers without lines that are imperative to many scenes. The role of the Crowd Director is very similar to that of the 3rd AD in Film productions with a little more creative inclusion. Their job is to work as a liaison between the Directors and the large group of performers of the play to execute the vision of the Director/s for the play. Experience in large scale story telling (i.e. Greek theatre, opera, etc.), corporate movement, and physical theatre is essential.

Assistant Director – Action/Militia: Due to the large number of volunteer performers involved in populating the world of the Passion Play, and the inherent violence of the world in which the story is told, ‘Assistant Director – Action/Militia’ is hired to focus on the staging of the military and militia blocking, the violence and the domestic interactions to it by the body of performers within the scenes. The role of the Assistant Director Action/Militia is similar to that of a Fight Director but with a lot more inclusion in the entirety of the play. Experience in fight direction, corporate movement, outdoor theatre, performance animals, large scale story telling and physical theatre are strong assets.

Intern Assistant Director: Due to the size and scope of the play and the set ‘Intern Assistant Directors’ are hired to work primarily as a liaison between the Directors team and the performers to execute the vision of the Director/s for the play. They assist the titled directors in taking and relaying notes from meetings and rehearsals, giving and relaying blocking notes to the performers, scene and performance coaching for performers, and more. Successful applicants should have strong verbal and written communication skills, be organized, have experience in breaking down a script and doing background research, be physically healthy and be comfortable with the outdoors and uneven terrain.

These are contract positions. They may have a small amount of preliminary satellite hours starting in early March through April but will be full time (5 day weeks), on site in Drumheller, AB, from early May through late July. The Passion Play is not preferential to either Union or Non-Union professionals. We can never be a CTA theatre company but we have hired Equity professionals under Guest Artist Policies Contracts in the past.

The Canadian Badlands Passion Play is one of Canada’s largest outdoor theatrical events. A not for profit, charitable organization in its 23rd season, the company annually depicts the life, death, and resurrection of Jesus Christ in dramatic form. With mixed cast of roughly 200 volunteer and professional performers, live animals and permanent middle eastern set structures on a massive outdoor stage, The Passion Play is an epic story told on an epic scale.

Please submit digital resumes to passionplayproduction@gmail.com no later than February 15th, 2016. If you have questions please do not hesitate to contact the email listed above.