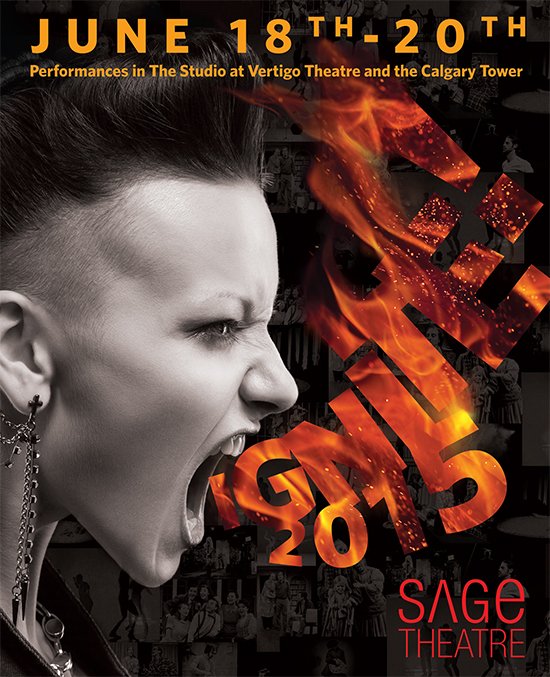 Sage Theatre’s 2015 IGNITE! Festival for Emerging Artists returns for another year, June 18 to 20. The 2015 festival presents a selection of exciting new voices, playwrights and performers, and will showcase theatre companies and artists that first broke onto the scene via the IGNITE! Festival in past years, filling the Studio at Vertigo Theatre with new theatrical works for three consecutive days.

The 2015 IGNITE! Festival features new works by Calgary-based playwrights David van Belle—of Ghost River Theatre—and Anna MacAlpine, as well as the IGNITE! Readings Series with Calgary’s own Major Matt Mason Collective (MMMC) and Theatre Transit. Local company Swallow-A-Bicycle Theatre returns to IGNITE! with a pair of emerging artist performance tours; these adventurous, roaming performances will span the Calgary Tower complex featuring edgy creations from some of Calgary’s most exciting emerging artists. Add to this a pair of new dance pieces featuring local rock band, The Left Behinds, and IGNITE! 2015 is sure to put on a series of spectacular shows.

We’re excited to launch the 2015 IGNITE! Festival as a testing ground for new innovations that we plan to continue in future years, including:

Partnering with the 2015 IGNITE! Festival to perform staged readings of both developing scripts and works by emerging playwrights are the multi-disciplinary Major Matt Mason Collective and Theatre Transit. Both companies were formed by artists who met one another as project teams during previous years of the IGNITE! Festival; since their meeting, MMMC and Theatre Transit have amassed passionate audiences for their audacious, exciting and ambitious work, and we’re pleased to welcome them back for another year at IGNITE!.

Beard, by David van Belle
Four voices unite in a tour de force solo performance from Natalie Gauthier to tell a story about a secret and a choice. Directed by Lara Schmitz, Beard is an intimate play about changing your world and having your world changed for you. The IGNITE! Festival commissioned David van Belle to write the play to allow an emerging actor-and-director team to develop their craft from the strong foundation provided by an established playwright such as van Belle.

Polonius and His Children, by Anna MacAlpine
Hamlet is one of Shakespeare’s most famous theatrical works—famous for killing off most of its cast. In this intelligent, funny and touching play, the noble Polonius and his children—Ophelia and Laertes—reunite in the afterlife to compare notes on how they ended up there. Alongside this family of literary lore, the audience explores what one would expect from any family, what each member expect in return, and what we’re all willing to forgive along the way.

The IGNITE! Dance Series
I for an Eye plays with sensation and, with what happens when this sense is suddenly lost; choreographed and performed by Janelle Schiffner.

Dis/Connected is about the ragged edge between “who I am and how I want to be seen.” It is a diary entry, an elegy, a battle-cry, and a prayer choreographed and performed by Melissa Tupin.