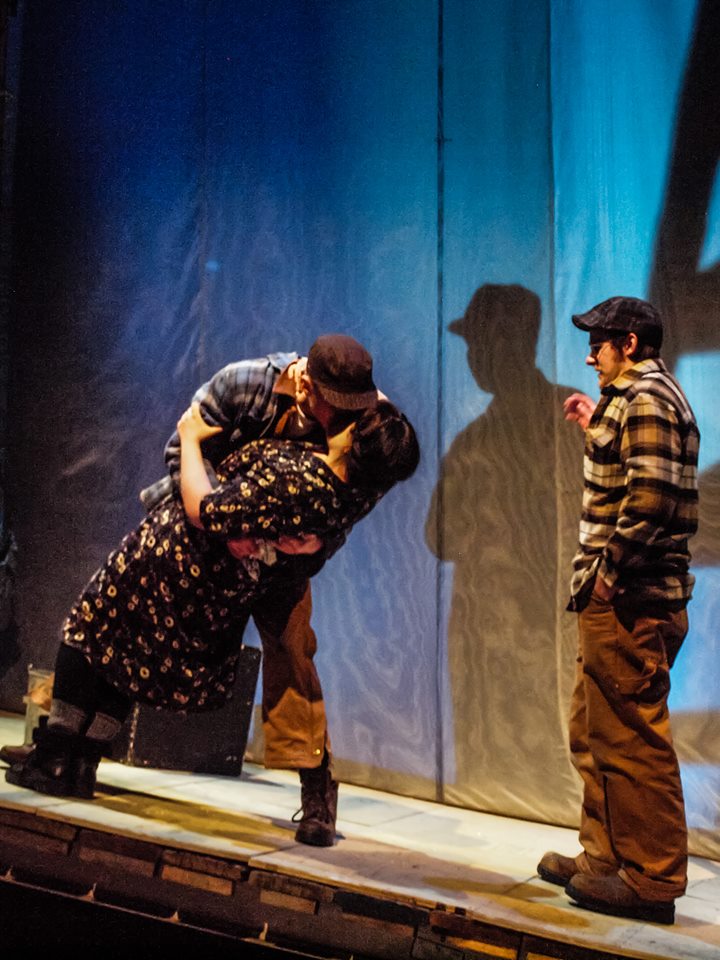 An Interview between Katherine Koller, playwright and Annie Smith, director
Annie and Katherine took some time out on January 31, after rehearsal, to talk about the premiere production of Last Chance Leduc at Grande Prairie Regional College.

Katherine: Annie, what other plays have you directed at the College?

Annie: Unity 1918, Blood Relations, Halo, Burning Vision, Step on a Crack and one other premiere, Sonny’s Song, which was written by a student at the college.

Katherine: I love that these are all Canadian plays. How did you found my play?

Annie: At Playworks Ink in 2013, I heard the staged reading of Last Chance Leduc in Banff. I was fascinated by the characters and their relationships because of where I live, in Grande Prairie, and the reality of life here, with oil and gas dominating.

Katherine: Besides Canadian stories, what are you looking for in a play for the College?

Annie: I look for plays that will challenge students in building character, and offer a challenge to me. In this play, it is the technical challenge of the shadow work. In conjunction with Grande Prairie Theatre Live, we obtained a Theatre Alberta Workshop by Request with shadow theatre artist Anita Moretti.

Katherine: Apart from the shadow workshop, what other resources does the College and the Grande Prairie community offer?

Annie: We have music students composing original music for the production, in the recording studio here. We have a sound booth to record the radio show segments of the play. Video projections are prepared by a staff member here. We have a community donor for the lumber for the set. And the Elder of the College, Loretta Parenteau-English, plays the aboriginal character in the play, Nohkom. The rest of the cast are alumni of the college. The shadow movers in this production are all ages, from younger students to dancers and choreographers in community. Some worked with me last year on the Century Play, Chasing the Dream: 100 Years of Grande Prairie’s Extraordinary Stories in Theatre, Song and Dance, with a cast of hundreds, which played on three outdoor stages.

Katherine: What are the metaphors that appeal to you in the play?

Annie: The wolf. I have been privileged to see wolves in the wild, and I see the wolf as teacher. The character of Nohkom attracted me, because I have worked in aboriginal communities in B.C. Evvie and Wes as young parents remind me of my own parents. And I love Tricky, everything about him, the comedy. The river.

Katherine: What are your hopes for the audience reaction to Last Chance Leduc, a play about the oil and water of a young marriage during the great oil strike of 1947?

Annie: Two things. First I would like those who live the life of oil and gas exploration and extraction to feel validated for the challenges and heroism of this work. Second, I’d like the audience to take a step back and question the special human and environmental costs, over time, from those same challenges.