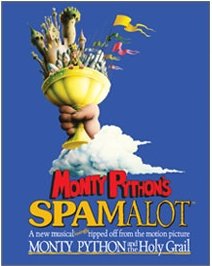 King Arthur – (male, late 30’s-60’s)
The King of England who sets out on a quest to form the Knights of the Round Table and find the Holy Grail. Great Humour. Good singer

Sir Robin – (male, 30’s-40’s)
A Knight of the Round Table. Ironically called “Sir Robin the Brave” though he couldn’t be more cowardly. Joins the Knights for the singing and dancing. Also plays GUARD 1 and BROTHER MAYNARD, a long-winded monk.

Sir Lancelot – (male, 30’s-40)
A Knight of the Round Table. He is fearless to a fault but through a twist of fate does discover his “softer side”. This actor must be great with character voices and accents as he also plays the FRENCH TAUNTER, an arrogant, condescending, over-the-top Frenchman, THE KNIGHT OF NI, an absurd, cartoonish leader of a peculiar group of Knights, and TIM THE ENCHANTER, a ghostly being with a Scottish accent.

Sir Galahad – (male, 30s)
A Knight of the Round Table. Begins as DENNIS, a lower-class “mud gatherer” who becomes Knighted and transforms into the dashing Sir Galahad. Also plays PRINCE HERBERT’S FATHER, a wealthy brutish Yorkshire man at odds with his sensitive son, and THE BLACK KNIGHT, who is always ready to duel despite multiple injuries. Strong bari-tenor singing required.

The Lady of the Lake
(female, 25-45) – A Diva. Strong, beautiful, possesses mystical powers. The leading lady of the show. Great singing voice is essential, as she must be able to sing effortlessly in many styles and vocal registers.

THE FOLLOWING ROLES ARE ALL PLAYED BY THE SAME ACTOR – (male, 20’s-30’s): Tenor singing required. Very good mover. Good supporting role.
Historian – A tweedy academic
Not Dead Fred – A sickly little fellow who, despite others’ beliefs, claims he is “not yet dead”
French Guard – The condemnatory French sidekick to the French Taunter
Minstrel – In Sir Robin’s band Prince Herbert – The hopeful and frilly prince who loves to sing and pines for his love atop a tower

Please express interest and submit photo & resume to kiracam.sm@gmail.com. Please indicate which of the above roles you would like to be considered for.

Successful audition candidates will be contacted individually and given sides to prepare.

Equity members will be seen first at all open audition calls. Equity members cast in this production will be engaged under an Equity form of contract. CAEA members: please bring your membership card to the audition.