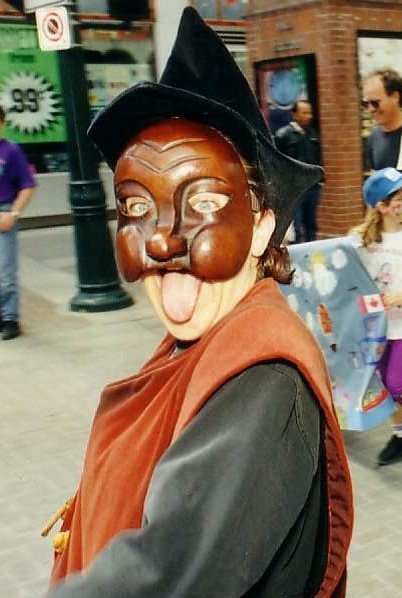 WHAT: A Master Class in Commedia dell’Arte
The Commedia dell’Arte was born out a response to the political and economic crisis of the 16th Century in Italy. It is a physical style of theatre characterized by masked “types” and is responsible for the advent of improvised performances. Due to its popularity, the Commedia outgrew its Italian roots and reached England, with Shakespeare incorporating many chase scenes into his comedies. In the 19th century, it made its way to North American shores in traveling medicine shows and vaudeville and became known as Slapstick Comedy; a style of humor involving exaggerated physical activity exceeding the boundaries of common sense. It takes its name from the “slap stick”, a club-like object used to accentuate a punchline in the Commedia dell’Arte. The style was explored extensively during the “golden era” of black and white, silent movies featuring such notables as Charlie Chaplin, Laurel and Hardy and the Three Stooges. Slapstick continues to maintain a presence in modern comedy that draws upon its lineage, in films of Mel Brooks to television with Rowan Atkinson. Today its modern version can be found in cartoons and animation.

The workshop will focus on the passions, schemes and foibles of the 7 main/stock characters of the Commedia. Using the beautifully crafted masks of Canadian puppeteer and mask maker, Trish Leeper as well as the sculpted leather masks of Amleto and Donato Sartori, players will have the opportunity to experience each character via their walk, their gestures and voice. Players will choose a character that they’d like to play; one that suits them or offers a challenge. Based on scene suggestions, players will improvise various scenarios.

WHO: Calling all Adult Fools with some performance experience

WHY: Join us in a workshop that will explore the roots of Slapstick Comedy and a physical means of theatrical expression, through the Commedia dell’Arte. This one day workshop will offer insight into approaches to physical comedy and broaden your performance horizons.

INSTRUCTOR: DAVID LANGLOIS is the founding Artistic Director of MetaPhysical Theatre, a company that uses the styles, techniques and vocabulary of physical theatre as the basis for the development of its work. Based in Toronto, MetaPhysical Theatre has created seven original productions that have toured to Fringe Festivals across Canada, in the USA, and to Australia and New Zealand. David is a graduate of Concordia University in Montreal as well as The Canadian Mime School. In 1976-77, he was a student at The Dell Arte School in Blue Lake, Calif. and in 1983 he was awarded a Canada Council grant to study under Jacques Lecoq in Paris. In 1994 he was awarded a Canada Council travel grant to study mask making under Donato Sartori at the Centro Maschere e Strutture Gesuali in Abamo Terme, Italy.

To register or for further information, please contact Tanya at:
theatreagogo@telus.net OR 403.282.4622
OR http://www.theatreagogo.ca/actingclassesforadultscalgary.html