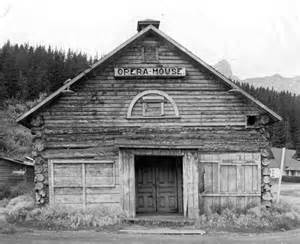 The Heritage Park Players will be presenting Rollin’ in Dough in Mistletoe by Marietta Slater in the Opera House for the Once Upon a Christmas Event at Heritage Park. This 25 minute Christmas Melodrama will have four performances at 11am, 1pm, 2pm and 3pm during the weekends from November 22nd to December 21st, 2014.

Play Information ~ It’s Christmas Eve in Mistletoe, but everyone is far from “Holly Jolly.” Rolland N. Dough is foreclosing on the entire town, which has everybody dreaming of a black Christmas! Will the townspeople be out in the cold, “walkin’ in a winter wonderland”? Will the most wicked, the most dastardly, the most evil, the most despicable villain of all time finally win out this time? If only the town could find the “five golden rings” hidden near Jingle Bell Rock, they’d have enough money to pay off their loans and save the town. Their fate rests in the hands of Randolph the Bowlegged Cowboy. Will he go down in history? This clever Christmas melodrama rustles up laughter and silly fun by incorporating Christmas carol lyrics into dialogue.

Director ~ Trevor Matheson
Time ~ The early 1900’s.
Setting ~ The interior of a toy shop in the small western town of Mistletoe.

Rehearsals ~ There will be two, three and a half hour rehearsals starting late September 2014. This is a non paying gig and is a volunteer commitment.

Characters:
Holly Berry ~ The heroine.
Carol Hall ~ The Mayor’s Wife.
Mayor Hall ~ Owns a business also affected by Rolland’s scheme.
Constable Evergreen ~ Trying to save the town.
Randolph the Bowlegged Cowboy ~ Clumsy hero who’s always trying to get Holly Berry under the mistletoe.
Rolland N. Dough ~ The most wicked, the most dastardly, the most evil, and the most despicable villain of all time.
Sandy Claws ~ Rolland’s sidekick; not the brightest bulb on the Christmas tree.
Tiny Kim ~ A small orphan.

Auditions ~ Auditions will take place September 21st, 22nd and 23rd and will consist of reads from the play. To set up an audition time please e-mail Trevor Matheson, Artistic Liaison, at tmatheson@heritagepark.ab.ca

The Heritage Park Players will be presenting three character interactions outside on the streets of Heritage Park for its Ghouls’ Night Out Event running Thursday October 23rd to Sunday October 26th from 5pm to 8:30pm. Characters will be brought to life by a chant by passing guests where the character will re-live their monologue/scene over and over throughout the evening. For each scene/monologue there will be three two hour rehearsals set at the actor(s) convenience. This is a non paying gig and is a volunteer commitment.

Rapunzel Scene ~ (Prince House) ~ Rapunzel encounters her Prince on the balcony of the Prince house and then he enters to save her, but is foiled by her evil master Gothel.
Characters:
Rapunzel (Female aged 13 to 28).
Prince/Gothel (Male aged 16 to 35).

Draculena Monologue ~ (Wing Chong Laundry) ~ A girl escapes from a coffin only to discover the wonders of becoming a new Vampire. She sets on a course of making her first kill, her beloved cat Charles.
Character:
Draculena (Female aged 13 to 60).

Auditions ~ Auditions will take place in late September and will consist of reads from the play. To set up an audition time please e-mail Trevor Matheson, Artistic Liaison, at tmatheson@heritagepark.ab.ca