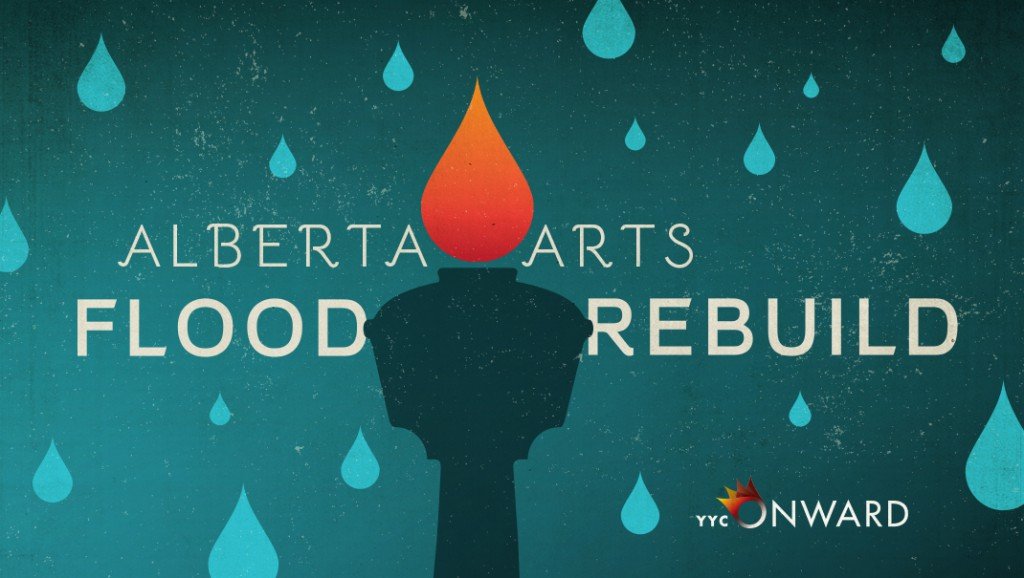 (Calgary AB) – Alberta Arts Flood Rebuild has completed its second round of funding, disbursing a total of $198,500 to nine artists and eight arts organizations affected by the June 2013 Alberta floods. This round of funding follows an initial intake in fall 2013.

Residual funds will be used for two legacy projects: $25,000 contributed from The Calgary Foundation will be used to create an Arts Disaster Preparedness Plan. The plan will build from the Disaster Preparedness Plan for The City of Calgary created by Calgary Economic Development and the Calgary Chamber, will include Calgary contacts and information as well as best practices, and will be shared as broadly as possible across the province and the country.

The approximately $25,500 remaining in unrestricted contributions from community donors will be used to create a special fund at the Elephant Artist Relief Society (EAR) for the purpose of helping individual artists of all disciplines in crisis. More information is available at ElephantArtistRelief.com.

“The Government of Alberta is a proud contributing partner to Alberta Arts Flood Rebuild,” said Heather Klimchuk, Minister of Alberta Culture. “Arts organizations contribute so much to the province, both socially and economically. This funding is one of the ways this government is helping to rebuild Alberta and invest in the future health of our communities and the culture sector.”

“In true Alberta spirit, the art community has yet again proven its resilience in the recovery from the 2013 Southern Alberta Floods,” said Mary Rozsa de Coquet, chair of Alberta Arts Flood Rebuild’s granting committee. “The unprecedented outpouring of support speaks volumes about our willingness to help those in need, no matter our circumstances. The Arts Disaster Preparedness Plan is a crucial investment as the sector prepares for future contingencies.”

Contrary to the first round of funding, requests and recommendations for funding were lower than the available funds. The lower-than-expected number of applications was due in part to the resiliency of the sector: artists and arts organizations found other ways of addressing their losses in the months between funding rounds, and also received assistance from other artists, agencies and community members. Several artists and arts organizations decided against applying because they assumed others were in greater need of the available funds.

Alberta Arts Flood Rebuild gratefully acknowledges the contributions from the Government of Alberta, the Alberta Foundation for the Arts, Suncor Energy Foundation, The Calgary Foundation, Calgary Arts Development and many individual and community donors. The Alberta Arts Flood Rebuild Fund is pleased to have dispensed over $200,000 to flood-affected artists and arts organizations in October 2013 after its first intake of applicants.

About Alberta Flood Arts Rebuild
Alberta Arts Flood Rebuild was created to support artists and arts organizations impacted by the 2013 Alberta floods by acting as an information source and helping to coordinate rebuilding efforts. This project was a partnership of more than 30 government and community agencies whose mandates include direct support of artists and arts organizations. Visit AlbertaArtsRebuild.ca for more information.

About the Alberta Arts Flood Rebuild Fund
The Alberta Arts Flood Rebuild Fund was launched in June 2013 on crowdfunding platformInvestYYC.com to raise money for artists and arts organizations from across southern Alberta as they recover from the 2013 floods. The funds will be administered by Calgary Arts Development in conjunction with other community and government partners from across Alberta whose focus is on direct support of the arts.