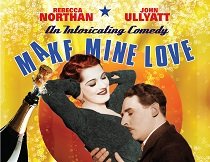 This is the latest World Premiere from audience favorite Tom Wood. This screwball comedy, set in the Golden Age of Hollywood, has it all–romance, humour, slapstick, mistaken identity, car chases and a happy ending. The perfect way to end the season! Directed by Bob Baker.

This romantic comedy tells several love stories but principal among them is the stormy romance of Hollywood star Lily Arlen and fallen Broadway matinee idol Hale Lane. The play is set in 1938 Hollywood and New York. Apex Pictures is in the middle of trying to make its latest Lily Arlen screwball comedy but the headstrong star has just fired the director, the leading man, the designer and the choreographer. Arlen flies to New York in search of new talent and that’s when the mayhem really begins…

Comic actress and improv star Rebecca Northan stars as Lily Arlen. Rebecca is well known to Citadel audiences for her sensational improvisational production known as Blind Date, which Northan went on to perform in London and New York.

A favorite leading man at the Citadel, John Ullyatt plays the role of Hale Lane. Ullyatt modelled his character in part on Clark Gable and, once John is in costume, the resemblance is striking.

Make Mine Love may be set in Hollywood and New York but it’s roots are firmly in Edmonton. Long a robust and highly active live theatre city, Edmonton has cultivated a tremendous diversity of theatre-related talent. Make Mine Love was written by renowned Edmonton actor, director and playwright Tom Wood and is directed by Wood’s long-time collaborator and Citadel artistic director, Bob Baker. The cast is mostly an Edmonton crew: Ullyatt, Arnold, Meer, O’Connor, MacDonald and Timoteo.  The rest are no strangers to the Citadel stage or Edmonton: ex-pat Gale, Northan of Calgary, as well as Norton and McCooeye of Toronto.  The production has been designed by internationally acclaimed Edmonton designer, Bretta Gerecke and local rising star, Cory Sincennes (Spamalot, Mary Poppins, Romeo and Juliet). Film-maker Jordan Dowler-Coltman, an Edmontonian now based in Vancouver, and Owen Brierly of Edmonton’s Guru Digital Arts College, created the video sequences. The entire production will be designed and built at the Citadel Theatre.

This play was developed through the Citadel’s Robbins Academy Play Development Program.