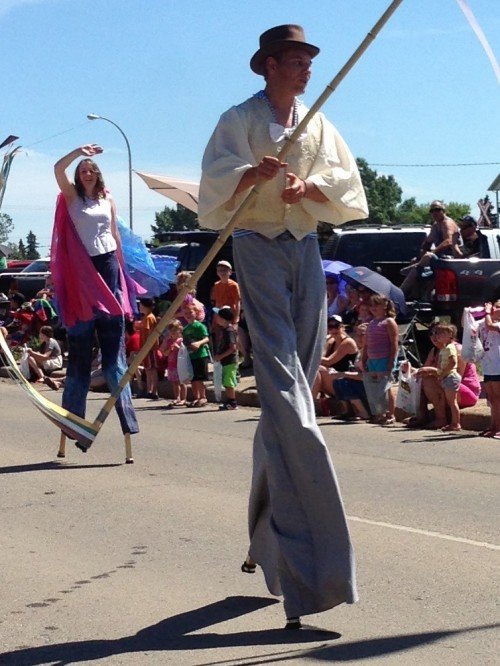 The GP Century Play is an outdoor processional theatre event that requires a Stage Manager to oversee rehearsals and performances that will be performed on multiple outdoor stages. The play is in three Acts, each of which has its own performance area with multiple platforms. Each performance area will have its own Assistant Stage Manager who will be working as a volunteer and will have been with the three Acts (one ASM per Act) throughout their entire rehearsal period from early February. Each Act has separate casts. The ASM’s will oversee the backstage crews, props and costumes for their respective performance areas. There is one common back stage area at a distance from the performance areas.

The Stage Manager, upon arrival in Grande Prairie, will attend all the rehearsals and learn what has occurred during the rehearsal process. He/she will attend all production meetings and work closely with the Play Director and Creative Team. She/he will train the ASM’s in the procedures that she/he devises for running the show. The Stage Manager will oversee the total staging operations, under the instructions of the Play Director, in consultation with the Technical Director. The SM will assist and oversee the Assistant Stage Managers and ensure that the total production proceeds according to the Play Director’s vision. The SM will also assist and oversee the Backstage Area Manager. The Stage Manager will work with the Site Manager to ensure that the audience is managed and positioned as required in relationship to the performances.

All 5 performances will be during daylight hours and there is no sound system planned other than for a “command post” on the site for welcoming the audience and in case of emergency. The command post is likely to be where the Stage Manager is positioned. He or she will be in radio contact with the Assistant Stage Managers, Back Stage Area Manager, Site Manager, and other key people as required.

Calling the show will not include lighting or sound cues but will focus on managing audience flow in three procession routes and actor entrances whether through the audience or onto the performance platforms. Each Act performs simultaneously with the audience moving through the three performance areas until they have seen all three Acts.

The experience gained through this position will be most relevant to managing outdoor, site specific events and outdoor film sets.