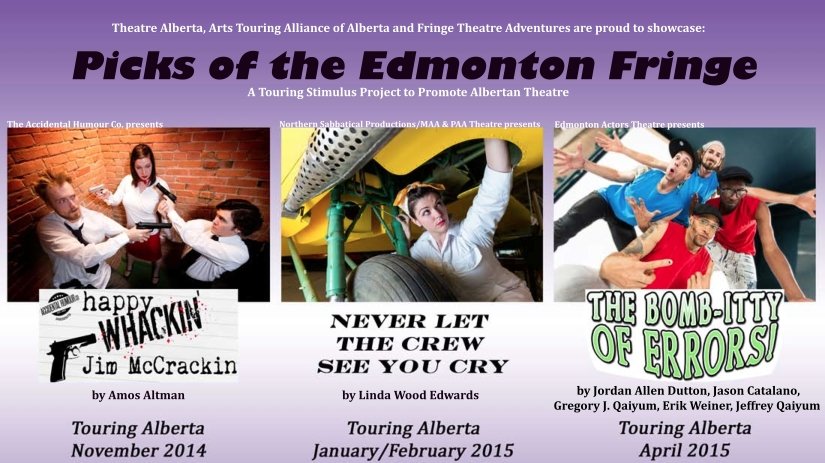 Theatre Alberta, the Arts Touring Alliance of Alberta (ATAA) and Fringe Theatre Adventures are proud to announce the inaugural Picks of the Edmonton Fringe lineup. These handpicked Albertan productions from the 2013 Edmonton Fringe Festival will be featured and offered to rural Alberta presenters at Showcase 2013, and then will tour the province in 2014-2015.

During the 2013 Edmonton Fringe Festival, a jury with members from across Alberta attended productions from companies interested in touring their work. Brenda O’Donnell, Executive Director of ATAA, which produces Showcase annually, assembled the jury so that it would be representative of rural audiences and presenters. “We are very excited to be collaborating with Theatre Alberta and the Edmonton Fringe Festival in this project that will support Alberta artists and offer new opportunities for our presenting membership,” adds Brenda.

Typically, the majority of acts that attend Showcase specialize in live music. However, during the past two years, Theatre Alberta has been approached by a number of presenters interested in theatres touring their work outside of Edmonton and Calgary. “According to our Playbill, very few Albertan companies tour professional theatre in rural Alberta, aside from theatre for young audiences,” notes Keri Mitchell, Executive Director of Theatre Alberta. “We felt that this was an opportunity to develop an untapped market and potentially kickstart a new tradition of touring live, local theatre in Alberta through a targeted stimulus project.”

To help ensure the project’s success, theatre productions selected for stimulus needed to be tour-friendly for rural presenters, with short technical set up and set assembly times. Fringe festival productions were identified to be ideal candidates: produced by local companies, a Fringe show must be able to complete its technical set up in three hours or less, and assemble/tear down its set in 15 minutes.

“The Edmonton International Fringe Theatre Festival still reigns as the oldest and largest Fringe Festival in North America with more than 200 shows in 11 days every August,” says Jill Roszell, Executive Director of Fringe Theatre Adventures, which produces the Edmonton Fringe. “We are pleased to be a partner in helping to bring home grown stories and new works of theatre beyond Edmonton and share with our fellow Albertans our love and passion for theatre. The Picks of the Edmonton Fringe are just a sample of the many wonderful shows the Festival has to offer each year and we hope this touring stimulus will boost theatre culture in all of Alberta’s communities.”

The following productions will be featured as the Picks of the Edmonton Fringe at ATAA’s Showcase 2013:

Two- and three-show packages will be available for booking at Showcase 2013. We invite you to join us as pioneers in building a new tradition of touring live theatre in Alberta! For more information, visit theatrealberta.com/tour or email Aaron Talbot, Communications and Marketing Coordinator at aaron@theatrealberta.com.