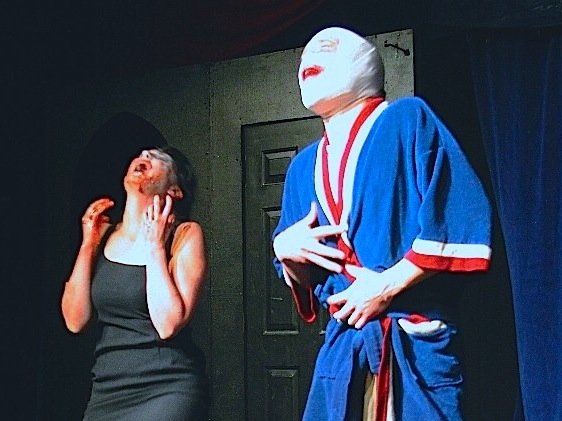 Crime in the Madhouse by Andre de Lorde

These evenings of theatre will be in the style of Grand Guignol (pronounced Geen-yole); early 1900s naturalistic horror shows. These evenings were graphic, amoral horror entertainment. An evening of Grand Guignol consisted of “hot and cold showers”; horror play, a sex farce and another horror play. Our audiences will go on a rollercoaster of emotions; laughing one minutes and screaming the next.

The style demands heightened physicality, gory effects and emotional risk. There will be workshops in the style for the cast.   Actors will explore being athletes of the emotions and play with ferocious abandon!

The evening will feature two horror plays and one farcical comedy.

Crime in the Madhouse: In a remote lunatic asylum, under the auspices of an order of nuns, three mad old women torment a young girl.

Tics, or Doing the Deed: A broad sex farce about misdeeds. All of the male characters are afflicted with pronounced tics, which come over them after the act of love.

Final Kiss: A disfigured man, whose only comfort comes from an opium hookah, one year after he was brutally burned by his ex, seeks revenge.

Auditions will be group exercises and cold reads.

Shows: October 24-November 2nd. Organized Crime Production will be performed at the Bird and Stone theatre just in time for Halloween.

NOTE: Cast and Crew must be over 18 year of age. Grand Guignol is not for the faint of heart….it ain’t your grandma’s night at the theatre. If you’re a fan of laughter, terror and hearing the audience squeal… this is for you.

Interested?  Please include a resume and headshot in an e-mail to nelalice@gmail.com.

This is an unpaid production, as Organized Crime is a new company, striving to take risks and bring controversial subject matter to stage.  Join the Crime…..