Home » Blog » What’s On (Edmonton): Eyes of the Enemy – Watch Me Productions

What’s On (Edmonton): Eyes of the Enemy – Watch Me Productions

What’s On (Edmonton): Eyes of the Enemy – Watch Me Productions 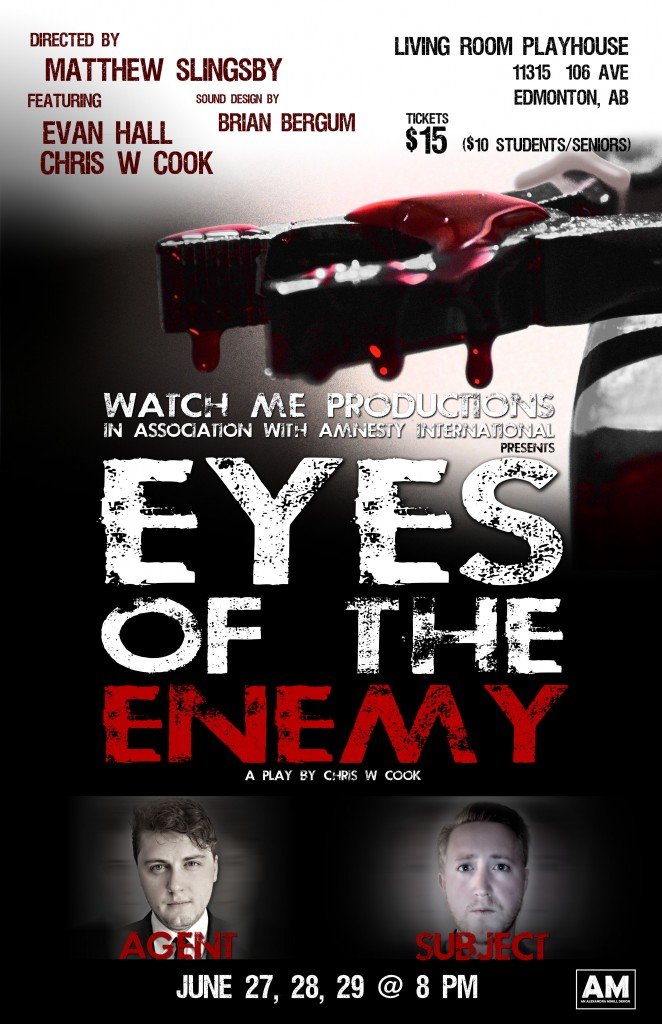 “Eyes of the Enemy” by Watch Me Productions

Watch Me Productions, in association with Amnesty International, is pleased to announce the Edmonton run of their Fringe hit, Eyes of the Enemy by Chris W. Cook. Performing June 27-29 at the Living Room Playhouse. (11315-106 Ave). Performances nightly at 8 p.m.. Tickets 15$ (10$ Students) at the door.

Jack is a journalist. Corbin is a soldier, an intelligence officer. When Jack is detained by Corbin and taken to an unknown location to be interrogated, what are the limits of these men? Enhanced interrogation or torture? What is the truth? How do you know when you’re looking into the eyes of the enemy?

Watch Me Productions began preliminary work on Eyes of the Enemy in 2007. Starting with research into the so-called “enhanced interrogation” methods used by NATO and its allies overseas. We explored different ways to present these practices theatrically and Eyes of the Enemy soon began to take its present form. The stories of Maher Arar, Omar Kadr, and others demonstrate the brutality shown to Canadian citizens and the seeming complicity of the Canadian and American governments in these acts of torture. We felt a calling to explore these issues on stage. Eyes of the Enemy is a work of fiction, but is also a commentary of where we believe our country and our global society are headed. The slamming of Canada’s human rights record in 2011 by Amnesty International shows us an interesting and new era in Canadian history; one where torture is not unilaterally condemned, but under certain circumstances, utilized. This is an alarming reality.

By teaming up with Amnesty International, Watch Me Productions hopes to continue it’s efforts to raise awareness and encourage discourse surrounding the use of and tacit approval of torture by Canada and its allies. A portion of all revenue will be going directly to Amnesty International. Amnesty will have representatives at each performance for pre and post-show conversations.

Eyes of the Enemy premiered at the 2011 Calgary International Fringe Festival and was produced again at the 2012 Edmonton International Fringe Festival to stellar reviews. 4.5 stars in the Edmonton Journal and several sellout performances combined with very positive community feedback from both runs led Watch Me Productions to embark on another remount of Eyes of the Enemy.

The largest issue facing human rights today is complacency. The willingness to accept atrocities committed against our own, both at home and abroad. We accept these things because of fear. Gross breaches of civil liberties are accepted under the thinly veiled guise of “intelligence gathering” and “National Security”. We accept these things because of ignorance, out of sight out of mind. Proof of innocence and basic charter rights are now secondary to what government agencies deem as national security interests. The first step in battling this complacency is the recognition of these acts of violence as simply that. Not a means to an end or an unfortunate set of circumstances. These “enhanced” techniques are certainly violent and hard to watch, but are a grim reality in our world. Eyes of the Enemy is a journey through that grim reality that explores the complexity of these issues.