Set during the biggest historical event in Alberta, the 1947 Leduc oil strike, Evalma and Wes struggle in the push-pull of a young marriage in peril, in winter, in a tarpaper shack in the woods, with a baby and another dry well. Wes wants a gusher, Ev wants a garden and Tricky wants a girl like her, his best friend’s wife. While the men work all day and all night, Ev meets a lady trapper in the woods, Nohkom, who shows her the power of the river in the difficult landscape of marriage. 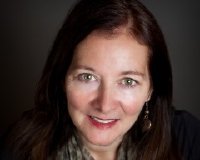 Katherine Koller writes in many styles and genres. Her comedies, produced by CBC radio, at the Edmonton Fringe, Jagged Edge Lunchbox Theatre and Winnipeg’s FemFest, are now invited to the U.S. and U.K. Her full-length plays concentrate on pressures of industry and the environment on human relationships. Four of her plays that explore this relationship between people and the land are collected in Voices of the Land: The Seed Savers and Other Plays (Athabasca University Press, 2012). Coal Valley: the Making of a Miner is included in The Alberta Advantage (Playwrights Canada Press, 2008).

One of Katherine’s health ethics plays, Queenie’s Castle, was translated into Cree by Saskatchewan Native Theatre Company in Saskatoon. Katherine also writes fiction, and for radio, film, ballet, dance and opera. A half-hour documentary about Citie Ballet, Taking Flight, will be broadcast this year. Last year, Theatre Encounter in Calgary produced her dance drama adaptation of Joseph Conrad’s Heart of Darkness and Tapestry New Opera in Toronto produced three of her mini-libretti at Opera Briefs. Katherine writes about her process in “Making Myth on the Prairies” in Canadian Theatre Review (Spring 2013), and teaches in the Department of English and Film Studies at the University of Alberta. Her website is www.katherinekoller.ca.

The jury had the following comments on Last Chance Leduc:

With its poetic dialogue and imagery, evocative themes and delicate structure, Katherine Koller’s Last Chance Leduc is most deserving of the Grand Prize in the 2013 Alberta Playwriting Competition. Congratulations, Katherine! A prairie classic in the making.

The jury also awarded Honorable Mentions to Calgary Playwright David van Belle for his play Liberation Days. The jury does not always award such honors, but they felt strongly that this play warranted recognition.

Calgary Playwright Ryan Reese received the Discovery Prize Category honor for his play Ascending the Blue. The emerging playwright will receive the $1,500 prize to help fund his future writing endeavors.

At the climax of the American Civil War, a seasoned war fighter and a young French Canadian endure one of the bloodiest conflicts to ever take hold of North America. As they prepare to face the enemy, their interactions and observations of one another begin to reveal that their destinies are on a collision course.

Ryan Reese is an emerging theatre artist based out of Calgary and is a recent graduate of the University of Lethbridge’s Dramatic Arts program with a focus on performance. In his final year at the U of L, he served as Co-Artistic Director of the University’s student run company TheatreXtra where he created the program for The TheatreXtra Series of New Student Work, highlighting student written plays with staged readings. He also took second place in the U of L’s Striking Plays and Prose Competition with his play Ascending the Blue. Some of Ryan’s next projects include working on a new play and writing and creating a web series, Granted, set to shoot this summer.

The jury had the following comments on Ascending the Blue:

In a category loaded with adventurous, exploratory writing, Ascending the Blue rose to the top with its tightly drawn character portraits and the sheer theatricality of creating full-blown battle scenes with only two actors. Set against the backdrop of the American Civil War, grizzled veteran Major Moses Smith faces off with a green French-Canadian volunteer soldier named Pascal Dube. Through the clashing of the two characters’ divergent world views and their averse need for each other, playwright Ryan Reese takes us on an intellectual and emotional journey, reminding us that the fiercest battles are usually within ourselves.

The jury also awarded an Honorable Mention in the Discovery Prize Category to Lethbridge playwright Camille Pavlenko for her play These Moments of Shine: A DoKumentary.

The jury for the 2013 Alberta Playwriting Competition comprised a panel of established Canadian Theatre Practitioners: Janet Munsil, Barrett Hileman, and Gordon Pengilly. The jury works blind (without knowledge of the names of the playwrights) to select a winner in each category.

For further information about the Alberta Playwriting Competition, Alberta Playwrights’ Network, or to arrange interview opportunities, contact the APN office at 403.269.8564, or toll-free at 1.800.268.8564.