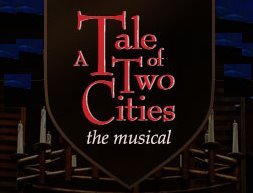 ELOPE Musical Theatre is pleased to announce its 2014 production of:

Location: Two ONE-WAY Tickets to Broadway’s Studio
107 Ave and 124 Street across from the Roxy Theatre

GASPARD / ENSEMBLE – French peasant whose child is run down by the Marquis St. Evremonde
(Baritone)

LITTLE GASPARD / ENSEMBLE – Gaspard’s little boy, killed by the carriage of the Marquis

MADAME THERESE DEFARGE – patient wife of Defarge who supports his dream of revolution in France (Strong belt; must belt/mix to E)

GABELLE / ENSEMBLE – servant to the Marquis; friend to Darnay (Baritone)

JOHN BARSAD – turncoat English con-man and spy, in the pay of the Marquis (Baritone)

FRENCH PRESIDENT / ENSEMBLE – presides over the Tribunal in Paris

Audition Requirements:
• Vocal – One selection of a lyric musical theatre piece. You will be asked to indicate what song you will be singing prior to audition. Please bring sheet music with piano accompaniment OR Karaoke (without vocal) track on a CD. We will have a skilled accompanist there to play for you.
NO A CAPPELLA.
• Acting – Reading from the Script
• Dance – Movement will be handled at Callbacks.