Menu
In support of our 2012 Gift A Play campaign, Theatre Alberta’s Library has profiled five titles featured on our Amazon.ca Wish List. We hope that by end of our campaign you will be able to access all of these titles in our Library. This is the second of our weekly Gift A Play Profiles! 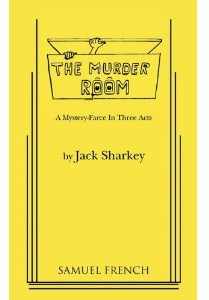 The Murder Room by Jack Sharkey

Bought! Thank you Julie Sinclair for your gift!

When this zany spoof of British mysteries opened in Sydney, Australia, reviewers spouted phrases like:
“a great vehicle for three ladies,” “a plethora of hilarious situations,” and “this is a romp!” “Really a minor gem … witty and sophisticated.”
– Newcastle Morning Herald
“Murder has never been this funny. A spoof of all crime thrillers … it is good clean mirth all the way. The quick, smart, extremely well timed dialogue of Jack Sharkey comes through loud and clear [with] never a dull moment.”
– Times
“There are secret chambers, secret panels and trap lids galore. They’re all operated by the most ridiculous contrivances and gloriously mucked up…. A high, mad melodrama.”
– Frank Harris

The following is from doollee.com – The Playwrights Database:
Jack Sharkey was born on May 6, 1931 in Chicago, Illinois. He began writing when he was 10 years old. He graduated from college with a BA in the Creative Writing Field of the English Major. After that, he taught school for two years from 1953 to 1955. In mid 1955, Jack enlisted in the Army. He served at Sandia Base, New Mexico as a Special Services worker. He wrote, produced, and directed one show per month for the Enlisted Men’s Club. After the Army, he worked as a copywriter for Sears, Roebuck and Company from 1957 to 1958.

In 1958, Jack went to New York to begin a full-time freelance writing career. He wrote Science Fiction stories and novels, humor articles, and mystery novels. Jack wrote his first stage comedy in 1965. Soon afterwards, he went exclusively into playwriting which he continued until a few months before his death. He has 82 published plays written under his own name and four others – Rick Abbot, Monk Ferris, Mark Chandler, and Mike Johnson. Mike Johnson wrote only stage thrillers. All the other plays are comedies and/or musicals. The plays are performed all around the world.

Jack passed away on September 28, 1992 after a bout with cancer.

Why we want it!

As we mentioned in our last Gift A Play Profile, murder mysteries (especially comedic ones) are a hot commodity at Theatre Alberta’s Library. However, we added The Murder Room to our Amazon.ca “Wish List” specifically because it was requested by a Theatre Alberta member. One of the primary criteria Theatre Alberta uses to fill our stacks is demand: if a member requests a title, we will do our very best to add it to our catalogue.

For more information about our Gift A Play campaign, click here!