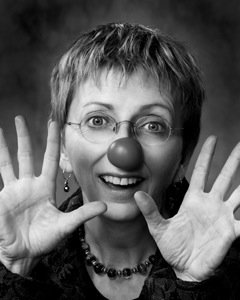 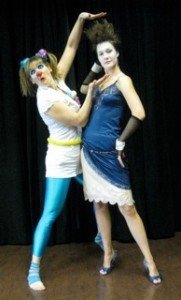 ADVANCED CLOWN WORKSHOP
Writing for the Clown with Jan Henderson

This course will focus on the creation and development of scripted clown routines. It is appropriate for performers with introductory to intermediate clown experience.

As a participant, you will
•    Turn improvised material into highly structured solo and group clown routines.
•    Learn to write scripts that record each physical and emotional action, or “beat”.
•    Use structure as a framework for performance that also supports improvisational digression.
•    Apply the fundamental rules of Comedy to writing and performing for the Clown genre.
•    Illuminate human experience through the celebratory lens of comedy
•    Expand the physical and emotional range of your Core Clown through exploration of the clown archetypes: Extreme Joey (high status), and Extreme Auguste (low status).
•    Develop duo material that emerges naturally from the friction of the Extreme Joey/Auguste relationship.
•    Explore and evolve makeup and costume.

Details & fees:
Days: May 6-24, 2013, Mondays to Fridays, 10 am – 5 pm
Course fees: This is a University of Alberta credit course (Drama 507, Spring Session, 3 credits), and as such, school course fee schedule and non-instructional student fees will apply. These will be officially set in February 2013. Approximate total cost is anticipated to be $720.
If you are not a current U of A student, you will be required to pay an additional registration fee for Open Studies (approximately $100/$75 for former students)
A maximum 14 students will be accepted

To apply:
Applicants must have consent of instructor to register. To apply, send resume and a paragraph explaining why you want take this course to: Jan Henderson foolmoon@shaw.ca.

Jan Henderson
Jan Henderson is one of Canada’s leading clown and mask teachers. She studied and performed extensively with clown and mask teacher, Richard Pochinko, and in 1975 co-founded with him what is now the Theatre Resource Centre, Toronto. From 1982 -1992, Jan was co-artistic director and performer with internationally acclaimed Small Change Theatre. She is on the Creative Faculty for the Leadership Development program at the Banff Centre, facilitates workshops through her company, Fool Moon Productions (www.foolmoon.org), and is a recipient of Global Television’s Woman of Vision Award. Currently, Jan teaches clown and mask in the drama department at the University of Alberta where she has received two awards for excellence in teaching. She is also co-artistic director of Edmonton clown company, Small Matters Productions, whose critically-acclaimed shows have toured festivals in Western Canada, the Toronto Festival of Clowns, and the New York International Clown Theater Festival. Jan’s most recent show, Fools for Love, was an official holdover of the 2012 Edmonton International Fringe Theatre Festival.