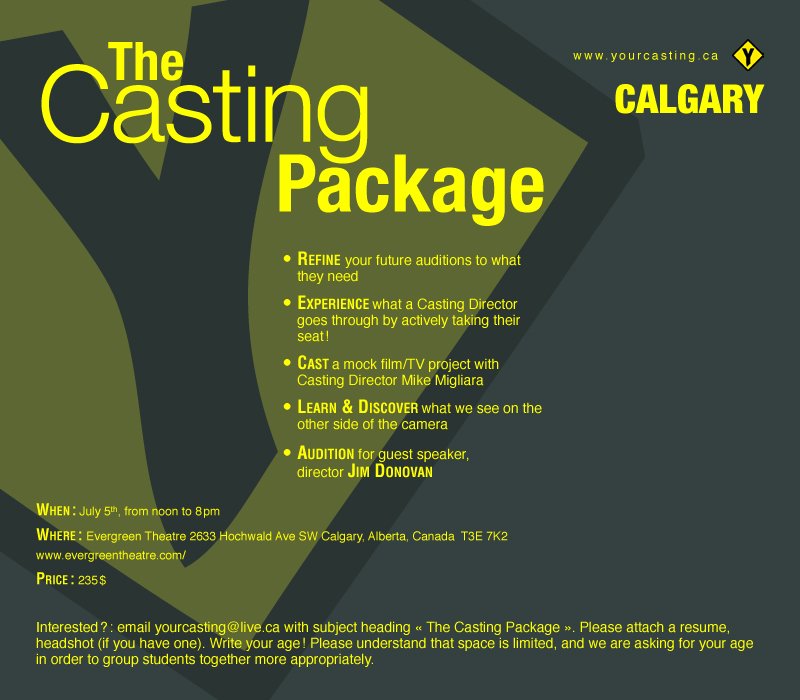 Casting Director Mike Migliara is coming to Calgary for his successful & unique audition workshop called “The Casting Package” on July 5th, 2012. Pasted below is a short promo video you can watch to to see more about it:

Workshop Summary: It’s unlike any workshop designed whereby the students will actively take the seat of the casting director, and cast themselves in a mock film. This is crucial so that they get to see first hand their unique assets, and start finding answers to the right questions!

The students will be split in groups. Students in one group will be the casting directors, while the others will audition for them. Then these groups will switch positions; allowing every student to cast and every student to audition. Finally, Mike Migliara will choose 2 winners of “Best Auditioner” and the winners will receive a gift certificate!! The workshop will also have a Q & A session with Special Guest Speakers Jim Donovan, (an Award Winning and Genie Nominated Director) and Gemini Award Winning Actor Tim Rozon.

Furthermore, as the students audition in front of Mike Migliara and each other, the students will be taught aspects of how to audition properly, scene analysis, taking direction, the do’s & don’ts for auditioning, rules for the waiting room and so much more- hence:

“The Casting Package” — WORKSHOP DETAILS:
Workshop Location: (YOU MUST REGISTER FIRST!! DO NOT JUST SHOW UP!)
Evergreen Theatre 2633 Hochwald Ave SW Calgary, Alberta, Canada T3E 7K2
www.evergreentheatre.com
When: July 5th Time: noon – 8pm
Cost: 235$ ( 10% discount for ACTRA Members) (taxes included)
Who should attend the workshop (beginners, intermediate..all?): ALL that are age 15 and over. BEGINNERS WELCOMED!
Apply to yourcasting@live.ca to register! Once you email a headshot and resume, then we will send you the full course outline, and payment instructions.
More info can be found at www.yourcasting.ca

As well, below are links to the workshop’s facebook pages. They will show you descriptions of the workshop, pictures, and comments from other students! (PLEASE DO NOT ASK TO JOIN THESE GROUPS BECAUSE THEY ARE EXCLUSIVE FOR THOSE WHO TOOK THE WORKSHOP).

Mike Migliara is a Casting Director who has not only worked extensively with producers and filmmakers, but has also provided self tapes and coaching services for hundreds of actors who have been booked from his self- tapings & coaching. Examples are actors like Tim Rozon, whom he helped to score a lead role in CTV’s “Instant Star”, and actor Gouchy Boy who was hired for a lead role in David Cronenberg’s film “Cosmopolis”. Just take a look at actor’s testimonials by going to his website: www.yourcasting.ca