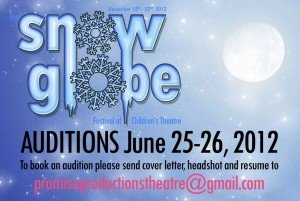 Promise Productions is very pleased to announce our 2012 General Auditions for the Snow Globe Festival of Children’s Theatre on June 25 and 26, 2012 in Studio B at the TransAlta Arts Barns (10330-84 Avenue, Edmonton). To submit for a general audition please send a headshot, current resume, and letter of intention to Ellen Chorley, Artistic Director at promiseproductionstheatre@gmail.com.

If you wish to be considered for Babes in Toyland please prepare a short monologue and a short musical theatre song. Please bring accompaniment in CD or tape form, a ghetto blaster will be provided for you.

If you wish to be considered for Robin Hood and Birdie on the Wrong Bus (but not the musical) please prepare two short contrasting monologues.

Pieces do not have to be Theatre For Young Audiences based, but please be aware all three shows in the Snow Globe Fest 2012 require actors to play multiple characters.

This year, the second annual Snow Globe Festival of Children’s Theatre will take place from Tuesday, December 18 to Saturday, December 22 at the Catalyst Theatre in Edmonton. The festival will feature a line up of three TYA plays: Babes in Toyland by R.J. Ryland and Bill Francouer, Robin Hood by Kathryn Schultz Miller, the world premiere Birdie on the Wrong Bus by Ellen Chorley, along with a musical lobby show The Holiday Half Time Show that will play in between performances.

About the Shows at Snow Globe Festival 2012