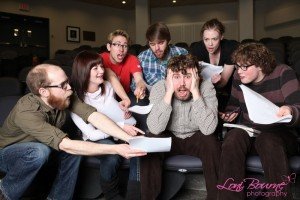 Scripts at Work (SAW) is proud to present a Festival of Plays featuring the new work of talented local playwrights. The festival will take place over two nights and is the culmination of an eighth consecutive year of the playwright development series.

The playwrights have been working with nationally renowned playwright Gordon Pengilly in Circle One – a playwrighting workshop that is designed for writers new to theatre. Since December, Pengilly has worked alongside the writers to hone their craft and develop stories in preparation for the readings.

Edmonton-based director Taylor Chadwick, a Red Deer native, will direct all six new plays, bringing the new work to life for an exciting night of staged readings by a team of professional actors.

Saturday’s event will feature the winning plays from SAW’s eighth year of playwrighting competition. The plays were selected by a jury of theatre professionals and were workshopped by award-winning writers Conni Massing and Trevor Schmidt throughout the winter. During the workshops, sixteen local actors volunteered their time to read for the writers in a process designed to help the writers hear and develop their new plays.

The winning playwrights whose work will be read are: Leslie Greentree and Blaine Newton, Fran Kimmel, Alexi Pedneault, and Lee Ann Waines. Professional actors will bring the work to life for a second night of electrifying new work. Two successful professional directors, Heather Inglis and Amy DeFelice, will direct the plays.