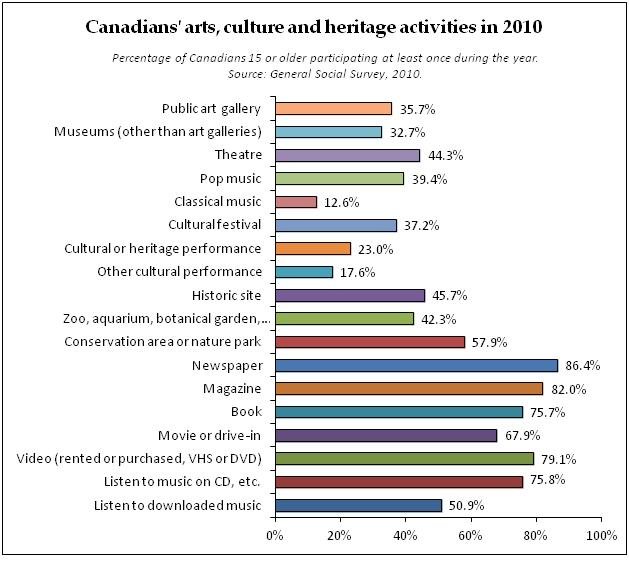 The percentage of Canadians participating in most of the 18 activities measured in the report – including art galleries, museums, festivals, historic sites, book reading, and more – reached record levels in 2010, higher than in 1992, 1998 and 2005, when this type of survey was also conducted.
The report also shows that, for many activities, there was a substantial recent increase in participation (i.e., between 2005 and 2010).
This means that a broader range of Canadians participated in arts, culture and heritage activities in 2010 than in prior survey years. However, this does not necessarily mean that arts, culture and heritage organizations are achieving record attendance levels, as the survey questions regarding frequency of participation are not specific enough to calculate overall attendance. In addition, the increase in attendance may be spread over a larger number of arts, culture and heritage organizations in 2010 than in 1992.
All Canadians participated in an arts, culture or heritage activity in 2010
In 2010, all Canadians 15 or older (99.7%, or 28.0 million people) participated in at least one of the 18 arts, culture or heritage activities. Because of changes in the survey wording over time, trends in overall participation rates cannot be calculated between 1992 and 2010.
Other key groupings of the participation data show that 72.4% attended a performing arts event or a cultural festival in 2010.
In 2010, 60.4% of Canadians 15 or older attended at least one theatre, popular music, or classical music performance in 2010 (16.9 million people):
Given changes in the questionnaire, the theatre, pop music and classical music attendance statistics in 2010 are not comparable to previous years’ data.
Respondents were asked three subsequent questions about attendance at cultural festivals or other performing arts events. In 2010, nearly one-half of Canadians 15 or older (47.9%, or 13.5 million people) attended a cultural festival or other performing arts event:
The 1992 General Social Survey did not include a question regarding attendance at cultural festivals, but this question was asked in the three subsequent survey years. There was very little change in the percentage of Canadians attending a cultural festival between 1998 (24.6%) and 2005 (23.7%). More recently, the percentage of Canadians attending a cultural festival increased substantially, from 23.7% in 2005 to 37.2% in 2010.
The percentage of Canadians attending a cultural or heritage performance increased from 11.8% in 1992 to 15.0% in 1998, remained stable in 2005 (15.1%), and increased substantially in 2010 (23.0%).
Unlike prior survey years, the 2005 and 2010 General Social Surveys did not contain specific questions about other performing arts disciplines, such as dance or opera. The 2010 survey also did not include any questions about participatory arts activities, such as painting, making crafts, playing music, acting, or dancing.
Access the full report here.
PrevPreviousNews: University of Calgary Opens Redesigned Rehearsal Studios
NextNews: Surplus Calgary School to be Transformed into Cultural WorkspaceNext
3rd Floor Percy Page Centre
11759 Groat Road
Edmonton, AB T5M3K6
Canada