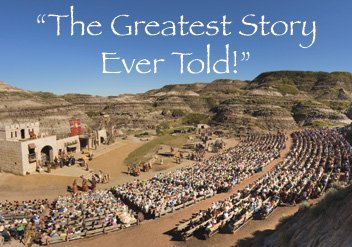 THE CANADIAN BADLANDS PASSION PLAY is one of Canada’s largest outdoor theatrical events. Now in its 19th season, the company annually depicts the life, death, and resurrection of Jesus Christ in dramatic form. An epic story told on an epic scale, this year’s production features a creative retelling of the Gospel of John. The brand new script will be originated by a mixed professional/volunteer cast of approximately 200 actors in a 2700-seat outdoor amphitheater.

Jesus understudy (male, 33 years old): The rightful heir to the created world arrives on earth to find his creation does not recognize him. As he seeks to restore an ancient kingdom, he must confront the cultural power sources of his time and the age-old human condition. Stage combat experience essential.

Volunteer Roles Available –
The Canadian Badlands Passion Play relies on it’s amazing group of volunteer actors to make the Passion Play happen. You can be part of the show as a volunteer actor with a speaking or non-speaking role. Nearly every character featured in the Gospel of John is present in out new script.

The volunteer speaking roles include a number of prominent Pharisees (Dark Pharisee, Nicodemus, Joseph of A, Abner), several disciples (John, Peter, Philip, Nathanael), the Lazarus family (Mary, Martha, Lazarus), Jesus’ family (Mother, brother James and family), Pilate, Herod, John the Baptist, Mary Magdalene, the Adulterous Woman, the Samaritan Woman, several key healings (man at pool of Bethesda, man born blind), and a number of key crowd speaking roles. There are big scenes in and around the temple in which the Jewish feasts are celebrated.

Many of these have opportunities for featured roles, dances and singing. There is a large wedding scene (Miracle at Cana) that involves similar crowd roles, as well as the feeding of the 5,000, triumphal entry, via, and crucifixion. As of now, every actor participates in the finale of the play. We need lots of teachers of the law this year.