Theatre Yes presents:
Stripped Down 3
Hot new plays from Canada and the world stripped down to only the words of the playwright, read by Edmonton’s brightest theatrical talents. 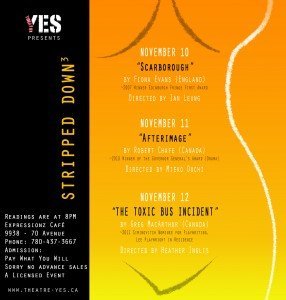 A licensed event. The café will be open, serving snacks and wet goods.

Lise Lacoeur was used to being shunned by everyone around her. Her gift of seeing the future in flashes leaves her ostracized from her town and community. An accidental electrocution is the beginning of her unexpectedly forged family and seemingly disconnected events intertwine to tell a story of connectivity and belonging. Based on the short story by lauded novelist and poet Michael Crummey, Afterimage explores the connections built within both family and community, of finding a place to belong.

“Creepy and compelling” —The Globe and Mail

Picture a safe Canadian city on an ordinary Saturday morning. A woman gets on a bus. She notices a foreign looking, dark-skinned man. He comes towards her and reaches into his coat pocket… Greg MacArthur explores the impact of terrorism on our lives in the relative safety of the west. Where does legitimate fear become crippling paranoia? Take a ride on the Toxic Bus to the place were fear becomes reality.

*****
Each reading will be followed by a short discussion (half hour max) with the artists and the audience about the plays values and relevance.

ADMISSION: Pay what you will. Sorry no advance sales.